Mad magazine was part of my teenage years. From cover to cover there was entertainment, sometimes zooming over my head due to the political satire. One of my favourite features was the foldable back cover that gave you a completely different picture. Loved it.

Unlike Alfred E, Neuman, I began to worry about Mad when it started accepting advertising in 2001.
I was still subscribing when the magazine went quarterly in 2009, then bi-monthly a year later. In the process, my monthly subscription had been extended to the point at which I could no longer distinguish which regularly received renewal notice was the real thing.
I eventually let my subscription lapse. I didn't want to pay in advance for a publication which clearly seemed to be struggling.

The real problem here is that the Usual Gang of Idiots has been turned loose on society. We will all suffer for that.

The original (?) Usual Gang of Idiots from the Mad online museum​

I had no idea it was still going. I inherited some paperback collections from my older brother back in the 70s, and they baffled me. The next time I heard about Mad was in occasional references in the Simpsons. Milhous at one points says "They must really hate that Spiro Agnew guy", which made me laugh because that was one of the things I recalled from my brother's books. (It was also from those that I learned who Spiro Agnew was, along with quite a lot of other American stuff.)
B

HareBrain said:
I had no idea it was still going. I inherited some paperback collections from my older brother back in the 70s, and they baffled me. The next time I heard about Mad was in occasional references in the Simpsons. Milhous at one points says "They must really hate that Spiro Agnew guy", which made me laugh because that was one of the things I recalled from my brother's books. (It was also from those that I learned who Spiro Agnew was, along with quite a lot of other American stuff.)
Click to expand...

BAYLOR said:
There was a late nigh Comedy show in the 1990's Mad TV.
Click to expand...

It was funnier than Saturday Night Live.

REBerg said:
It was funnier than Saturday Night Live.
Click to expand...

I guess that the spies didn't see that coming

I can recall reading Mad back when John F. Kennedy was still President. I'm sure much of its satire went over my head at the time. I bought every issue for several years during the 1960's and 1970's. In 1999, I bought Totally Mad, a collection of CD-ROM's which reprinted every issue from the start to the date the collection came out. I read all of it.

The magazine started going downhill sometime in the 1990's, in my opinion. Every once in a while I would look at an issue of the 21st century, without much enthusiasm. Some changes that set off my alarms were when they started accepting advertising, and when they came out with a special children's edition of the magazine. The last I heard, they were relaunching it in some kind of new format. It seems that it was time for it to die.

Excellent article on the early days of MAD here.

What, me mourn? Yes. Spoof is becoming an art form that's slowly dying. Many people are just either too sensitive or oblivious to enjoy the genre in modern times.

I discovered MAD in the seventies. Some early issues included a comic book. Like this one.

​
I slowly stopped reading them in the early nineties. For me, it was the funniest magazine ever. They spoofed everything and everyone. Tons of great silly cartoon stories. I enjoyed the paperback books too.

Strangely, my first MAD issue I bought, from a magazine stand, was this one. As a kid I thought it was a weird parody of a film that I'll probably never see.

Over a decade later, I saw the movie, A Clockwork Orange, when cable was first introduced. I was shocked by how graphic it was. Today, many films are even worse, BUT, like most horror movies, gore seems more important then a good story.

Anyway. MAD will always hold a place in my heart and fun times in my memories.

One of my favorite covers.

Reading the comments about mad here and else where it seems mad was something people read ina certain era 50s-9-s and it tampered off in the 2000s.
unlike superman and spiderman which a new generation gets in to it. young readers(few kids read)dint get into it.I think once its gone for awhile some how fresh talent may put a new spin into it.

This is from my local newspaper here in Chattanooga, so thank you for that.

Speaking of the movie parodies, a couple of thoughts.

Mort Drucker was an astonishingly brilliant caricaturist, far better than anybody else who drew the parodies.

The better the movie, the better the parody, in general. My favorite movie of all time is 2001: A Space Odyssey, and I also adore Mad's 201 Minutes of a Space Idiocy. 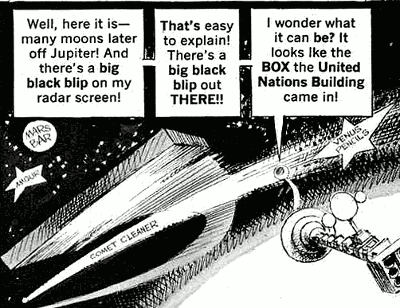 Tell me it's a hoax--it must be a publicity stunt.

Like elvet, I really used to like the ingenuity of the folding back cover, and I always enjoyed the never-ending struggle of 'Spy v Spy'...

Der Spiegel has referenced Mad on this month's cover, although forum rules probably prevent me posting the picture.

In the late sixties I was fortunate enough to be able to buy the U.S. edition of Mad regularly (the UK edition was a meagre poor relation). It was wonderfully alive. Skimming through these posts, I'm not sure anyone has referenced Dave Berg's "The Lighter Side of...". I thought this really captured something of suburban USA.
My favourite was always the movie satire. Sometimes I felt I did not need to see the film: I'd already read the Mad satire and that was as good as seeing the film.
You must log in or register to reply here.
Share:
Facebook Twitter Reddit Pinterest Tumblr WhatsApp Email Link
Top