Greetings friends!
Could you please help me out with something?

I have a friend who is working in the field of BCI (Brain Computer Interfaces) and asks for aid in this task.
He requires one or (if possible) a few examples of SCI-FI stories where the story protagonists (or the universe of the story) use brain implants which (after implanting) change the personality or behavior of the individual (for better or worse).

Do you guys know of any such stories, perhaps? Mentioning prospective answers in the paper thanks will be noted (at least that is what I will let him know upon receiving the answer - give thanks where thanks is due...)

Profession by Asimov. A future where people are taught by computer interfaces and where those who are unable to be taught in this way are classed as feeble minded - except they may be the only ones capable of original thought.

If ever you find it please let us know.
There's nothing worse than an unfini
T

Not an implant per se but the caps in the Tripods series by John Christopher control the personality of the adult humans.

These aren't pre-1960 but they are quite dated today:

The Doctor Who TV story from 1966 The Tenth Planet that introduced the Cybermen would likely be closer to what he is looking for. The Cybermen were originally created by Dr Kit Pedler and Gerry Davis in 1966. Dr Kit Pedler was a medical researcher at London University and became Doctor Who’s unofficial scientific adviser.

The name "Cyberman" comes from cybernetics, a term used in Norbert Wiener's book Cybernetics or Control and Communication in the Animal and the Machine (MIT Press, 1948). Wiener used the term in reference to the control of complex systems, particularly self-regulating control systems, in the animal world and in mechanical networks. By 1960, doctors were researching surgical or mechanical augmentation of humans and animals to operate machinery in space, leading to the portmanteau "cyborg", for "cybernetic organism".
Click to expand...

Which probably means that instances of fictional brain implants earlier than the 1960's are going to be hard to come by. The stories that I have read about mind control earlier than this used drugs to control mood and alter the mind of the subject. Here I'm thinking of Yevgeny Zamyatin's We (which was a fore-runner of works such as George Orwell's 1984 and Aldous Huxley's Brave New World) or Ira Levin's This Perfect Day (1970).

Makes me think of the tv series THE 100

There was the zone implants used in the Gap series as well.
The bad guy controlled the space cop with them
C

Thank you so much for this!!
Cordially thankful,
Tom

And from Nov - Dec 1964 we first saw these guys, brain operations and interfaces with their control helmet made them behave so . 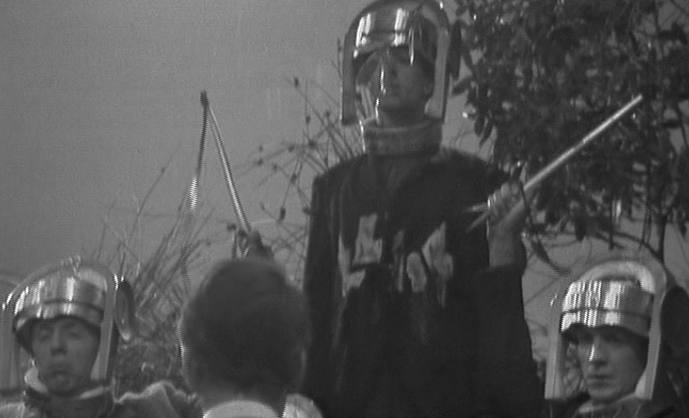 Robomen were humans converted by the Daleks into wholly obedient slaves during the 22nd century Dalek invasion of Earth. The Daleks captured prisoners and operated on their brains in a surgical procedure called the "transfer" (TV: The Dalek Invasion of Earth) or "robotization", (PROSE: What To...

I forgot about the Robomen (while still in the sixties, it precedes the Cybermen by two years.)

I'm really intrigued by this question myself now. I wonder what the first instance of surgical brain implants to make obedient slaves or to make people intelligent actually was. Ideas in science fiction books/magazines are generally years ahead of TV and film, so there must have been quite a few written prior to Doctor Who.

I've just remembered that Flowers for Algernon by Daniel Keyes, first published in a magazine in 1959 (but not as a book until 1966), does fit the bill. That is a bitter/sweet story that I won't spoil here but involves surgery to increase intelligence. This Flowers for Algernon Wikipedia entry explains how various editors tried to change the ending but Keyes insisted it remained the same. It also explains where the original idea came from.

But is there a story that is even earlier than 1959?

tobl said:
you have a complete series of 6 books dedicated to that lolo cassandra kresnov series by joel shepherd
Click to expand...

Those appear to be published in 2006 and are concerning an android.

We are looking for pre-1959 and humans with mechanical brain implants (I'd call it a Cyborg except that term wasn't coined until 1960 by Manfred Clynes and Nathan S. Kline here: Cyborgs and Space )

Unfortunately, that article doesn't have references, instead it says, "A complete llst of references for this paper mag. be obtained by writing to the Editor, Astronautics, 500 Fifth Ave., New York 36, N.Y." but I expect that address is now a Dunkin Donuts or McDonald's.

There is an article about Manfred Clynes here: The Man Who First Said 'Cyborg,' 50 Years Later

The article mentions his work on "the Computer of Average Transients" CAT as a machine that could read brain electrical activity 'brain waveforms', and understand their meaning by averaging out the noise. If you could then recreate the 'brainwaves' you could give the brain impulses. However, the Mnemotron CAT 400 was designed in 1962, so later than Cyborgs and Space. I also found an advert for the CAT 400B from 1964.

However, it looks like he might have had the actual idea much earlier, because the spike and wave graph there is from a 1949 paper, "Observations on the Wave and Spike Complex in the Electro-Encephalogram." PubMed Central.

Is this a case of real science being years ahead of science fiction ideas?

There is a 1953 movie, Donovan's Brain, based on a 1942 story by Curt Siodmak. It's a bit reversed from what you would think about implant technology. There are only a couple of wires, a few tubes, that connect to an old fish tank the naked brain is residing in. The communication is accomplished by wireless telepathy. The naked brain of the dead millionaire never loses it's greedy business ethics but it does change the personalities of the people around it that it seeks to control.

So, that's where the Brain in a Jar trope originates from! As you say though, it is the very opposite of what we are looking for, but it does have the controlling aspect. Still, if that story was written in 1942 it makes me even more certain that someone must have written about cybernetics before 1960 without calling it that.

The First World War saw the first plastic surgery on men who had parts of their faces blown away, some men did lose parts of their brains and yet still survived. I find it hard to believe that someone didn't think we could fix the brain with electrical cable since the idea of re-animating dead bodies with electricity had been around since at least Frankenstein, and Hollywood films of Frankenstein's monster invariably included electrical cables and sparks flying.

On the other hand, we've only recently begun to control Parkinson's disease using brain implants that stimulate. I think people have a dislike about the whole idea of putting something in their brain. As Woody Allen says in Sleeper:
Doctor: "Your Brain will be electronically simplified."
Miles: "My Brain? It's my second favourite organ!"

However, I'm certain that people will soon be queuing up for Wi-Fi Brain interfaces as soon as they are offered.

Dave said:
However, I'm certain that people will soon be queuing up for Wi-Fi Brain interfaces as soon as they are offered
Click to expand...

no f... way for me. i mean, forget virus and cyberattacks. there's a lot of trash on the net

tobl said:
there's a lot of trash on the net
Click to expand...