I either read a book or saw a movie with the main theme focused on a women (Elf) ? who must quest to find a place that she only feels is where she belongs she will then find a meadow or clearing where she transforms into a tree. Story is about 30 years old ? The story/movie has many amazing accounts of the people she meets and the places she visits. Her health begins to fail and she continues on her journey to find the perfect place where she must be and where she finds her true inner self and becomes this amazing tree where she can feel the wind in her leaves and the birds on her branches. I have not had any luck with researching - giving this venue a try.

Sounds quite a bit like I remember the plot of The Elfstones of Shannara, but I also read it long ago (when it first came out, closer to forty years ago, I think) and there are parts of your description that don't ring a bell, so I'm not sure.

I'm with Teresa, it's Terry Brookes Elfstones of Shannara.

OP has not responded but I'm giving this a third vote for Elfstones of Shannara by Terry Brooks. It is the second novel in the Sword of Shannara series.

There is an ancient tree called the Elcrys that is dying. The tree was holding back a horde of demons imprisoned 10,000 years ago. Amberle, the elfen girl, competes to become a caretaker for the tree and wins, but the tree shows her frightening visions and she runs away. As the tree slowly dies, the magic barrier imprisoning the demons weaken. A powerful demon named the Dagda Mor and two of his henchman force their way through the weakened barrier before the rest of the horde can get through so that they can set their own plan into motion. The druid Allanon acts to counter the Dagda Mor's plans, and takes Will Ohmsford, not his real last name, with him, because he is actually the son of the protagonist of the first book, and heir to Jerle Shannara, the first elfen King, and is able to wield the elfstones.

Full synopsis and picture of the book cover here: 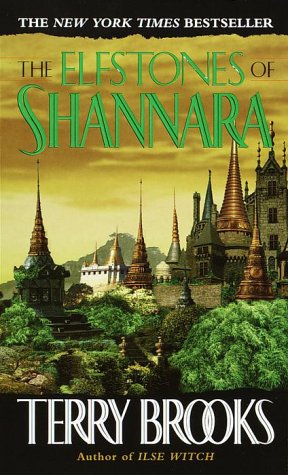 The Elfstones of Shannara

The Elfstones of Shannara is a fantasy novel by Terry Brooks, the first sequel to The Sword of Shannara and the second book in The Original Shannara Trilogy. It provides the history of the Elves, which was only hinted at in the preceding story, and follows Wil Ohmsford, grandson of Shea (the...