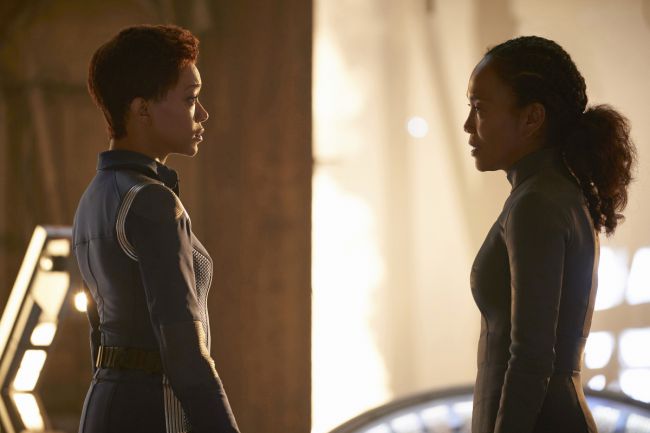 Starfleet fights to block the articial intelligence Control from seizing the Sphere data - a course of action that will have a devastating outcome.
Click to expand...

"Struggle is pointless."
How many variants on "Resistance is useless." are they going to find.

farntfar said:
"Struggle is pointless."
How many variants on "Resistance is useless." are they going to find.
Click to expand...

Actually, quite a large part of this episode felt a little like writing by numbers. Everything was too convenient. The technobabble was overwhelming. Leland acts different but no one realises until the very last moment, and he escapes, obviously. The forgotten Dark Matter finally has a use, but thy just don't have enough time. The data is downloaded, but he doesn't quite have enough. Would they really use precisely the same form of words so that Georgiou (and any of the audience who had been sleeping) would wake up? Not my favourite episode but certainly positioning itself for some end game to come in the final episodes.

Let me just say that over all these years, I've never seen a better representation of a StarFleet than what they showed at the beginning of the episode. But the intriguing bit really is that the design were fairly sophisticated even though the StarFleet was relatively young.

The intriguing bit of course was that Michael's parents were playing with the time-crystals as if they really were trying to push the limits and gain a time-machine, before the Klingon's arrived.

It is just that I cannot recognise the design. Could it be that Klingon's didn't kill Michael's daddy, but the race was something else, and Burnham assumed that it was them, because the Klingons have a certain spooky man reputation associated to them?

The confirmation for the Klingon's came through the Red Angel suit's datalog that the bad boys were in the business of raiding the colony and trying to gain access to the prototype time-travelling device, which looks super slinky at its first jump, but much cooler after 843 jumps.

Intriguing bit is that unlike in the other times when ST crews have conducted TT business, Michael's Mum made a jump to an unknown destination and she survived 950 years into the future, at unknown space.

Later on she learned that Control had waged a genocidal war against the living, and in the process the StarFleet and other races had lost to the antimatter explosions, which had rendered all homeworlds to dead worlds. But that is also a problem because you have to somehow sustain yourself and as there are no food, Mummy Burnham should have passed away due starvation.

Yet, somehow she looks fitter and better than many people in the STD's crew. She claimed that she'd found a place in some M-class planet and the Red Angel suit had somehow anchored itself to that place. Maybe more intriguing detail is that she'd also learned that the Sphere and Control are tied together, meaning that together they create the time-paradox, which displays as those red phenomenom in the real space.

But Dr Burnham was completely understand what Pike way saying when he claimed that the events had lead to her. Yet, somehow, Mummy Burnham was able to rely to Pike that they needed to delete the Sphere archive in middle of Tyler's mission.

How does she gain this information, if she only arrived to save her daughter from death?

Did some of the redshirt slip the information to her when she woke up? She said in the earlier log that the only solution was to put the sphere in the path of Discovery, when she had failed to destroy it. But then, how is that all of suddenly it's no good and the data has to go?

If you locked into the present time, how do you know what changes will happen in the future?

Mum couldn't understand how Discovery could not have been able to delete the Sphere Archive. She went on to lecture Michael about time, and stuff, as if she's a special agent who only understands the paradox. But she doesn't even understand that there is no way she can break it if she tries to destroy the items that had been tied together. She doesn't understand that she is living in her own paradox, kind of like the stuff that you can find in the Russian dolls.

The only thing uniting the Control and the Sphere is the Red Angel. I thought that Michael's idea of sending the Suit into the future and saving Mum in the present, was a brilliant one, but also a risky one. Sure Michael would have Mum, but the Suit and the Data wouldn't have a guardian. But that won't stop the paradox from happening.

I have a big problem with Control turning Captain Leland to a nanohulk. They showed his eyes turned black, and yet, when he returned this ship, he was back to normal, including the eye that had been pierced in the last episode.

Emperor surely questioned his motifs of changing the target from Michael to Mum, but even though she has the perspective of knowing the mirror universe technology, she couldn't notice the ultimate change in Leland. Tyler was once again completely blind and even though you would think he's the best to spot the doppelgangers, he keeps failing time and again.

He accepted Leland's orders of conducting an espionage mission against a StarFleet vessel without consulting Admiral Cornwall or Leland's superiors as if he'd a completely new to the game. When is he going to learn that the veteran spies cannot be trusted and everything should be verified before accepting blindly any orders?

It took him really long time to get a point where Leland's orders didn't make sense. Yet, even then, he accepted Leland's order to standby without connecting the dots. If you are going to be a spy, you should have a suspicious, analytical mind.

I really hated when the nanohulk turned out to be invulnerable to the magic of 24th century civilisation. The nanites were able to render all the damage to nothing as if there was an endless supply of them inside Captain Leland.

It's just if that machine in above picture had only a limited supply and all those plasma burns destroyed a few of them, then how come they can regenerate the damage instantly? It would have been more plausible, if the nanohulk would have taken a massive amount of punishment, and still beaten Georgiou in that form. Now it's like they are supreme magic.

Having read the criticisms on this thread, I note they simply ound like different writer's ideas, than bad writing on Discovery's part.

During this episode, I said to myself, "Oh, I don't like where this is going, at all!" Fortunately, the ending was more than acceptable. Overall, I didn't like this episode - except for its fantastic visuals. Michael sounded too like mommy's little girl - childish - and mommy sounded like she thought herself superior to everyone else. Captain Pike sounded and seemed totally ineffectual, and the rest of the crew just seemed abscent.

Still, Michael's history came more into focus, and I think Spock was treated better here. I'm hoping the Red Angel is gone and we get to see the storyline advance. I just haven't enjoyed the RA story arc as much as last season's thrill ride.

I think we're all avoiding the main issue here: when is Spock going to shave that stupid beard?

Narkalui said:
I think we're all avoiding the main issue here: when is Spock going to shave that stupid beard?
Click to expand...