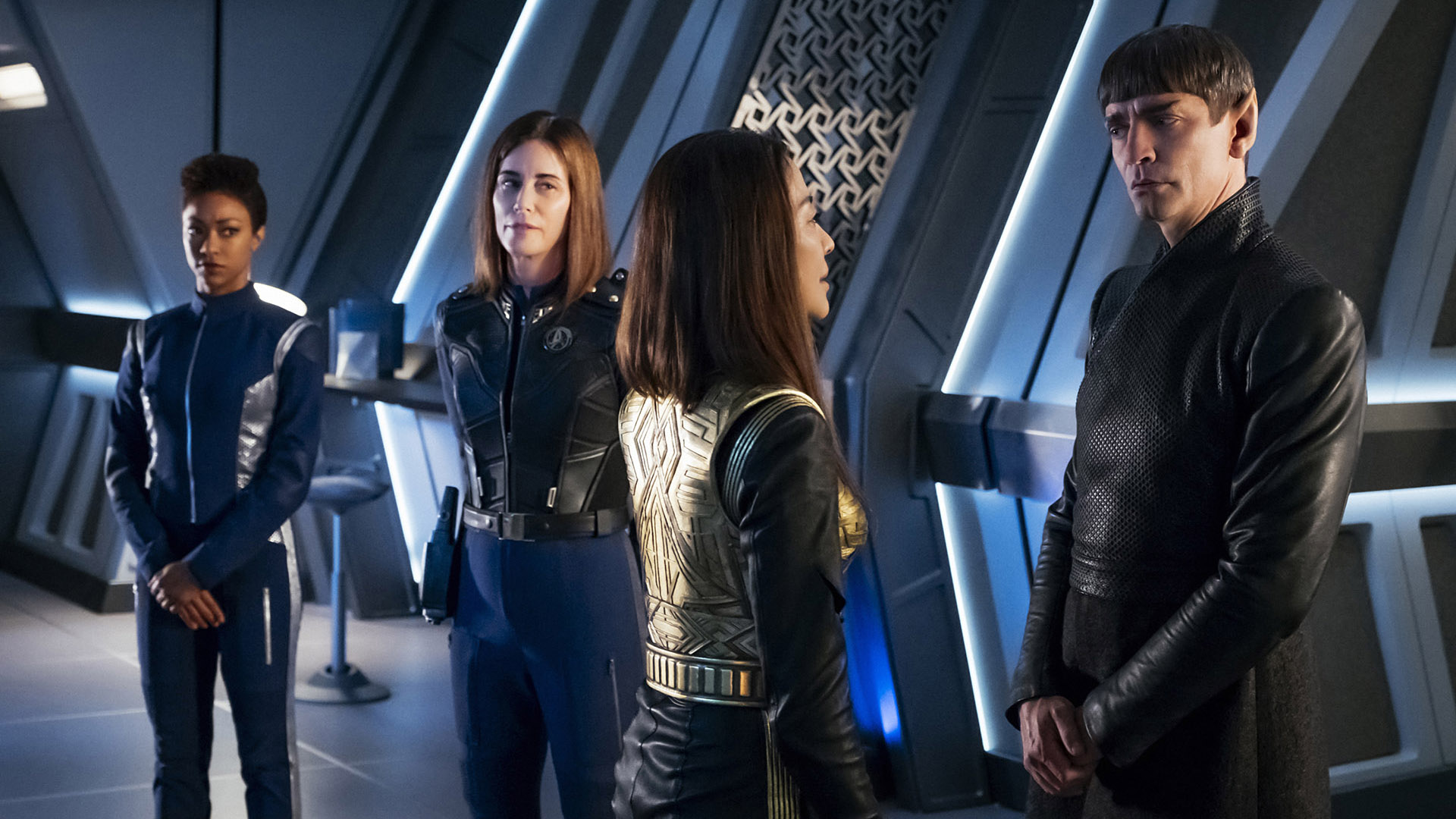 A mysterious sphere threatens the U.S.S. Discovery even as May, in her original form, implements a plan that puts Tilly's life in danger. Saru and Burnham's bond grows when Saru is forced to acknowledge a deeply unsettling Kelpien truth. Pike receives new intel on Spock from a loyal friend.
Click to expand...

I am the first one to watch this?

I sometimes wonder if too much happens in one of these episodes. There is a lot to take in, and multiple difference stories happening at once with far more characters than other TV shows. So, we get to see Number One eating hamburgers, and an explanation of why the USS Enterprise has no Holographic technology. (They still need to explain why the Discovery has the Enterprise's symbol on their badges though.)


I actually thought he would die here. I'm not disappointed that he didn't. He did somehow sense death, even that of a celestial object, and now he will now longer feel fear anymore. Quite a major progression for that character.
If you ever wondered about Starfleet's vast knowledge of worlds to which no one has gone before, then this episode will partly explain that.

This episode was more than a filler on their never-ending 'search for Spock' though, with the whole Tilly becoming a Fungus story. Staments gives a speech about pollution and the spore-drive being better for the environment than Dilithium, only for us to discover that it has been destroying a whole civilisation. His apology was surely a little wasted.


Not really a spoiler but the cliffhanger leaves the possibility that Tilly has become Chicken Supreme inside something that looks like a pupae. Only given that they couldn't come to kill off Saru and the fact that it isn't even mid-Season, then I think it is unlikely that they have killed off Tilly either.

Dave said:
I am the first one to watch this?
Click to expand...

First one to comment. I haven't watched it yet. I have been too angry on NHS to write a review.

The photo isn't from this episode. Or, if it was that scene was later edited out. I could believe it was edited out because there was so much packed into this episode already.

Dave said:
The photo isn't from this episode. Or, if it was that scene was later edited out. I could believe it was edited out because there was so much packed into this episode already.
Click to expand...

The CBS official site pointed me to it. Sorry for making a mistake and not taking a screen capture from the episode. Frankly their site pales in comparison to AMC's official site, where each series gets the same dedication as TWD. It's like CBS has forgotten on how to do webservice these days or then they knew nothing about it in the first place.

A silly question, perhaps.
Is the Number One who eats the hamburgers the same Number One who was originally played by Majel Barrett in The Cage?
She certainly looks quite similar.

farntfar said:
A silly question, perhaps.
Is the Number One who eats the hamburgers the same Number One who was originally played by Majel Barrett in The Cage?
She certainly looks quite similar.
Click to expand...

Yes, she is meant to be one and the same.

I liked the idea but I wonder if it is just "fan servicing" and to be honest, she didn't really bring much to the story except the explanation of why Enterprise uses older tech than Discovery. That whole area is best left alone in my humble opinion, because I think the more they try to explain continuity problems, the more they cause more continuity problems i.e. the Klingon Forehead problem.

ctg said:
First one to comment. I haven't watched it yet. I have been too angry on NHS to write a review.
Click to expand...

Oh no! Hope you are ok and have calmed a little.


I adore all the cross references from the original series, makes me scream with delight. Oh and just to lower the tone a little, I am in love with Captain Pike.

Ensign Shah said:
I am in love with Captain Pike.
Click to expand...

He wasn't so bright as a lad.

Ensign Shah said:
Oh no! Hope you are ok and have calmed a little.
Click to expand...

Darling, if you'd be kicked out by your doctors after 34 years from the practice, because you've become too difficult to handle medically speaking, you would be pissed. But yeah, I have calmed down, and it's not me, it's Mrs Grey who's in trouble. I'm just the carer.

It is interesting that Number One can leave Enterprise and just hop on the in another ship to give a briefing on the repairs, while the Captain flies all over the universe. Why is that the StarFleet don't own barges or support vehicles to repair the damn vessel. Although it was funny the Number One claimed that the Enterprise is the only ship in the fleet that has mechanical problems!

WTF? Why is that? Also why is that Spock's bailout has been classified to the highest level in the StarFleet? Sure the man can be pain in the bottom, but the murder and the escape shouldn't be classified to the highest level, as it'll hamper the investigation, and more so it'll make the investigations really damn difficult. The only reason I can think of for the classification is that the Admirality knows about the Red Things and they want to keep quiet about it.

Have you noticed that none of them have jumped in the ship or even contacted Captain Pike through the hyperspace? It's like they gave them the super secret Discovery to Captain, but at the same time, they didn't really care to finish the case, or even put in enough of resources in the game to get the Enterprise fixed.

Could it be that the fleet command has been corrupted?

Tilly and the magic mushroom. Man, they are writing the whole mushroom thing as joke instead of being serious about it. I don't know how one mushroom can do all those things. I mean not only it can produce spore that can emit psycolobin, but it can change shape and size in snap of fingers, and seemingly even engulf a person completely by adding mass that it didn't had before.

If I'd been Cpt Pike, I would searched the alien database for the references on the mushroom as soon as the computer was able to translate the data. I also find it a bit weird that Statmets couldn't really figure out what to do with the darn thing until it was too late and Tilly had been consumed.


Dave said:
Only given that they couldn't come to kill off Saru and the fact that it isn't even mid-Season, then I think it is unlikely that they have killed off Tilly either.
Click to expand...

I think they've sent Tilly to the sporeverse and Statmets has to make a trip to get her back. Then the StarFleet classifies the mushroom incident to highest level in order to suppress the ridicule factor among the party members. Later on they'll decide to scrub the whole sporedrive concept and never visit again.

I thought Saru's incident was because he'd caught Saurian cold. I strongly believe that the diseases could jump between the species in the Starfleet, but nobody is scared about it. It's like everyone knows that they cannot catch another species bugs.

I love that Saurian now speaks and I do have to applaud to Saru's actor as he really put an effort in the character to make Saru look as if he went through a terminal disease.

The spider. We don't know for sure if there are sentient life out there, but if the Tardigrades can live in space, surely there must be creatures that has longevity to explore the galaxy and see its wonders. But we often thing that the creatures cannot be intelligent, because they're animals as you can see in the episode. There are numerous species in the StarFleet but none of them has encountered life in the space?

The creature itself reminds me of that super-sized world destroyer from the original series. It kind of behaved the same way, but it really surprised me that it was able to upload a virus into the Discovery systems and prevent it from fleeing. How did it knew the computer language and that the virus was going to be so effective? And why the Discovery crew thought that they can create antibodies, when none of such things work in the computer world? There is no immunisation against the viruses in the computer realm. It doesn't work like a biological system, and more so, the spider itself doesn't look like a biomechanical being.

I guess we have to put its abilities down to magic. Although I find it strange that everything else was affected, but the virus didn't turn off artificial gravity anywhere in the ship. It is not a mission critical system, and it should have been affected just like any other as it's controlled by the computer.

I'm not at all happy with what happened to Saru.