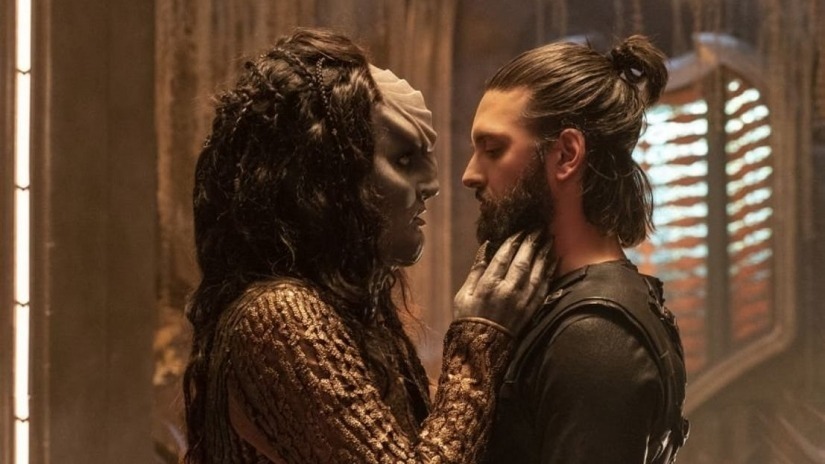 Turmoil on the Klingon homeworld requires the intervention of a secretive Starfleet order (31), while Burnham hosts a family member in search of answers.
Click to expand...

I cannot believe I'm first one the write a review. It must be my lucky day. Then again it might Burnham's lucky day as her Klingon lover Ash Taylor is coming back in the small screen. We all knew last year that his tale wasn't finished, even if he was finished in the StarFleet.

But first about the red thing,

Like us Burnham is completely baffled by it, but I believe that they could be a physical manifestation of a temporal or dimensional anomaly. To the StarFleet and to the humanity in general the phenomenon is new, but to the originator, like Tilly's ghost, it's old news.

Tilly said that May, "...was a symptom of an unfit mind." But in story wise, she a spectre that only certain people can see. Captain Pike claimed that "Spock had admitted himself to" a mental institute. It's just two case, Tilly and Spock, makes the case, while Burnham's vision makes it a pattern, thus rendering it to be something that science can dissect ... or us behind the small screen.

In Tilly's case, I'd say to her: "You are not going mad, you are experiencing something wonderful and fascinating." Spock himself might just use that one f-word.

It is good to see that traditional Klingon's are back and the Empire is made from many faces instead of the smooth ones that we saw in the last season. As always they are unhappy and there is not enough of conflict in the air for them to be satisfied. One could say that it's a sign of their downfall, but the thing is no culture can remain the same for eons.

They have to accept the change or go into the history books as a race that couldn't adapt to the change, when they needed to. Later on, when TNG progresses that shows as a civil war. Even further down the line, when DS9 godly events happen, they are missing the old days

Maybe bigger puzzle in this episode was why Spock would had murdered three doctors? Our most favourite Vulcan is mostly non-violent. Although occasionally as the needed has arrived, he has shown loving the action and being a formidable opponent. It's just it was always for peace...

... if there could only be peace in the Alpha-Quadrant.

What will Voq's son be called and will the Klingon High Council accept the fact that there is a human working under the High Councillor L'rel? Is it also possible that the Red Angel could had visited Vulcan's in the past, and in similar style saved some of them? Or is the Red Angel only associated to humans, and the reason for Spock to see them in his childhood is because he's half-human?

I don't think I have ever seen as much blood spilled as they did in the High Council chambers. It's just nobody knew that the Emperor was coming to rescue in a fashion never seen before. She looked positively alien in her suit.

"From this point on you may call me ... Mother!" WTF is happening? I laughed out loud on that insult. It was even funnier to hear Klingon's lamentations on the subject.

It's as if they wanted us to forget about Ash, and the Emperor Philippa Georgiou, and the spore that entered Tilly's shoulder, just so they could bring it all out together at once and intertwine it together with the dark matter and Red Angel stuff.

Only one thing that I was surprised about, and that's that Philippa Georgiou is not the Captain of the Section 31 stealth ship. I wonder how she took that? Not well, I suspect?

I'm someone who didn't think Season One 'Star Trek Discovery is too much talk, not enough action' but they have certainly listened to those fans who did think so in this Season.

I loved this episode. It was so refreshing seeing old Klingons who keep comploting and fight for the power. But they don't know yet Philippa. She can destroy all of them in this dimmension, too. And she took Ash in her team. Interesting. I wonder what she plans exactly. Maybe, becoming an emperor again ?

Dave, com'on ! You coundn't have expected the news about Ash's son. He didn't know about him either.

So Tilly is not haunted by an angel after all. That was funny.

I didn't expect to see Michael's mother. Not that I'm complaining. I'm glad we learn more about Spock's family.

And Stamets is still on Discovery. Hmm. Maybe they will keep him around after all.

Dave said:
Only one thing that I was surprised about, and that's that Philippa Georgiou is not the Captain of the Section 31 stealth ship. I wonder how she took that? Not well, I suspect?
Click to expand...

We don't really know, but considering that they're thinking about giving her own series, we might find out later on how she got in the ship and how the crew took it.

Alexa said:
I wonder what she plans exactly. Maybe, becoming an emperor again
Click to expand...

That's what I'm scared of, that she wants to feel again the power in her fingers, and taste of Kelpian in her mouth (as a dinner before I'm accused of other things). Thing about the Section 31 is that they are not scared of doing something super controversial. It might be that Georgiou wants to be Emperor, but all Section 31 manages to do is to install her as the ruler for the Orion Syndicate.


Alexa said:
And Stamets is still on Discovery. Hmm. Maybe they will keep him around after all.
Click to expand...

I hope so too. He made me cry with his fuzziness in the Engine room.

Alexa said:
Dave, com'on ! You coundn't have expected the news about Ash's son. He didn't know about him either.
Click to expand...

No, I hadn't expected that either.

I did seem a bit forced though. She had him before Voq became Ash but didn't tell Ash about him. There must be a long term plan with where this is going though. There always seems to be in this show. If the child is at the Boreth monastery, that is the same that Worf went to, to re-discover himself, and it is also where the clone of Kahless appeared to pretend he had returned from Sto-vo-kor. It was originally founded by Kahless followers.

Dave said:
If the child is at the Boreth monastery, that is the same that Worf went to, to re-discover himself, and it is also where the clone of Kahless appeared to pretend he had returned from Sto-vo-kor. It was originally founded by Kahless followers.
Click to expand...

Do you think we are going to see that place? Also what prevents Mother from ever entering their grounds, if she so chooses?
Last edited: Feb 2, 2019

ctg said:
Do you think we are going to see that place? Also what prevents Mother from ever entering their grounds, if she so chooses?
Click to expand...

Yes, to the first, almost certainly, and to the second, I don't see why not, except that the Klingons are a little Patriarchal. That never stopped the Duras sisters from doing whatever they wanted though.

I don't think we are going to see the monestary. At least not in this series.