Bick's thoughts on the Discworld novels

I was in the middle of reading other books, and had quite different plans, and then I made the mistake of picking up a Discworld book and read a few pages, found myself dragged into it and ended up reading it in a day or so. I then pulled the next one down off the shelf and read that similarly quickly. And now I just finished a third and picked up a fourth. These books are a bit like wine gums or Pringles. Hard to stop. I imagine I'll end up reading a fair way through these and have many on the shelf, and have picked up many more used from a good used bookstore near me, so I shan't run out immediately. I thought maybe I'd make a few short comments and give star ratings for each one I go through, and in time, I may offer a ranked list of best to worst. 'Cause, you know, folk like lists and ranks and stars don't they?

Before I get on with any individual book posts a couple of general comments. I was wondering after I read the first one what order to read them. I'm aware of how they could be grouped by theme (i.e. witches books, city watch, etc.), but I'm too OCD to choose a slightly arbitrary approach (should death books come before of after witches books?), so I've gone for publication chronology. I'm well aware that they are supposed to improve as Pratchett got into his stride, but I'm ready for that and have not been put off by the first three, despite obvious weaknesses, so now I'm over the early hump, I'm looking forward to the best ones to come. Its a shame that some of the best (by reputation and review on the interweb) are books 8, 11, 13 and so on, so I have some way to go, but I'm quietly confident I'll get there.

I'm hopeful this may also be mildly interesting to others as I'm not a longstanding Discworld fan. I read the first few once in the past (25-30 years ago) and remembered nothing* about them before getting back into them now.

* Literally nothing. Which is slightly odd, but I'm thinking I may have read them after visits to the pub back in the heavier drinking days of my youth. But in a sense that's a good thing, as my view of the first few this time was uncluttered by pre-existing bias.

This is a funny book. It's not tied to anything else yet, and is extremely readable. On the downside, its not a novel, but four novellas about the same characters, which barely has a plot. The plot is to try not to die in multiple weird ways, I guess. Its hard not to enjoy though, despite it clearly being a bit of a writing experiment for Pratchett, it sets up the world quite nicely. ***
Last edited: Dec 3, 2018
Starfarer SF
B

A friend of mine hooked me on the disc world novels. I picked up The Color of Magic and I couldn't put it down .

Returning to the Discworld after a few years, Pratchett has decided to write novels set there, and the novel arc here is better than the previous book. That said, I'm not sure its quite as enjoyable as the first book somehow; so its both a bit better and also slightly weaker. Pratchett in this book is better at the early parts of the book where characters get to be funny and wise and he cracks some terrific puns. What he does a little less well is the great dramatic conclusion, and potentially world-ending events don't suit his characters or style hugely, so it didn't entirely work for me. That said, Cohen the Barbarian is good and I enjoyed it. Very readable, if not very good. ***
Starfarer SF
B

Writer that I recommend to Pratchett fans is James Branch Cabell.

This was slightly better I thought than the Light Fantastic, but only just. Like the prior book, its best in the first two thirds, and slightly less successful in the high tension denouement at the end. It introduces Granny Weatherwax, who is good, and the little girl Esk is an appealing character, which can't be easy to achieve as she's only eight, but still manages to be interesting. I suspect a lot of the ideas and 'rules' set out here may nit be kept or returned to in later books - it reads like a tale that need not impact the Discworld much going forwards. It had some laugh-out-loud moments though, and a couple of the funniest lines in Discworld so far. Pretty good, but not a huge step forward yet - I'm expecting a bit more by reputation from the next novel, Mort. ***1/2
Starfarer SF

BAYLOR said:
A friend of mine hooked me on the disc world novels. I picked up The Color of Magic and I couldn't put it down .
Click to expand...

Yes, despite it's structural flaws and lack of plot in a traditional sense, its an addictive and rapid read.
Starfarer SF

I haven't picked up a Discworld book in ages. Maybe it's time for a reread.

I've only read The Light Fantastic and really enjoyed it. I need to read more...

One thing I most enjoyed with Discworld books was the sense of a world changing. Many stories we read feature change, but often its the shift of power from one body to another rather than a change in the peoples themselves. Or if we see change the story sets out the beginning; the struggle to make that change take place.
With discworld each book starts to make changes, some small, some big. Some in the background and some in the forefront. Through the series we see the peoples and world starting to really make changes. It's a very real view on a world going through some major upheavals and this theme grew in strength as the series progressed.

And through that change we also come to see loss. The loss of old ways, old ideas and even old mythologies and magics; but also the birth of new ones.

Few authors are willing to worldbuild only to tear it all down and rebuild it, but Discworld is that world in flux and massive change.

A quick disclaimer - I didn’t post the picture at the top of the thread. It is perhaps worth mentioning that the first book shown on the top left is not a Discworld book, and quite a few books are late novels that I don’t expect I’ll get to, so I doubt I’ll review more than half of those shown. Thanks for the pic though.
Last edited: Dec 3, 2018
Starfarer SF

I liked the way that each book introduced a new main character but the background characters carried on from book to book, helping to give the world some depth.

Bick said:
A quick disclaimer - I didn’t post the picture at the top of the thread. The first book shown is not a Discworld book, and quite a few books are quite late novels that I don’t expect to ever get to.
Click to expand...

That'll be Brian adding the image as he's making this a featured thread on the main page.

And it'd be a shame if you were to never reach the later ones as I'm enjoying these mini-reviews - its always fun to see how someone reacts to the series for the first time.

The Big Peat said:
That'll be Brian adding the image as he's making this a featured thread on the main page.

And it'd be a shame if you were to never reach the later ones as I'm enjoying these mini-reviews - its always fun to see how someone reacts to the series for the first time.
Click to expand...

I may read some later ones eventually - but he wrote a lot, and I’ve read they go downhill a bit after the mid-2000’s as his illness had an increasing impact. I’ll see how I go I guess. Glad you like the mini reviews anyway.
Starfarer SF

Bick said:
I may read some later ones eventually - but he wrote a lot, and I’ve read they go downhill a bit after the mid-2000’s as his illness had an increasing impact. I’ll see how I go I guess. Glad you like the mini reviews anyway.
Click to expand...

They do somewhat for my taste at least, but that's only about 35 books into the series... which just goes to prove your point about how much he wrote

Heh! Just been reading the Death books in the last few days.

There is a reading order of sorts since some books do refer back to past events but I think they can be read as stand-alones. I read them in publication order.

I came into much like you, @Bick - bought the first one (annoying in a format that is completely different to the crazy Kirby covers) then rapidly bought several others and devoured those, and the rest as and when they came out in paperback.

The later ones are not as good - a mixture of heath issues (I suspect) and running out of ideas - but there are so many good ones.

Here's a reading order I found (actually on Wikipedia). 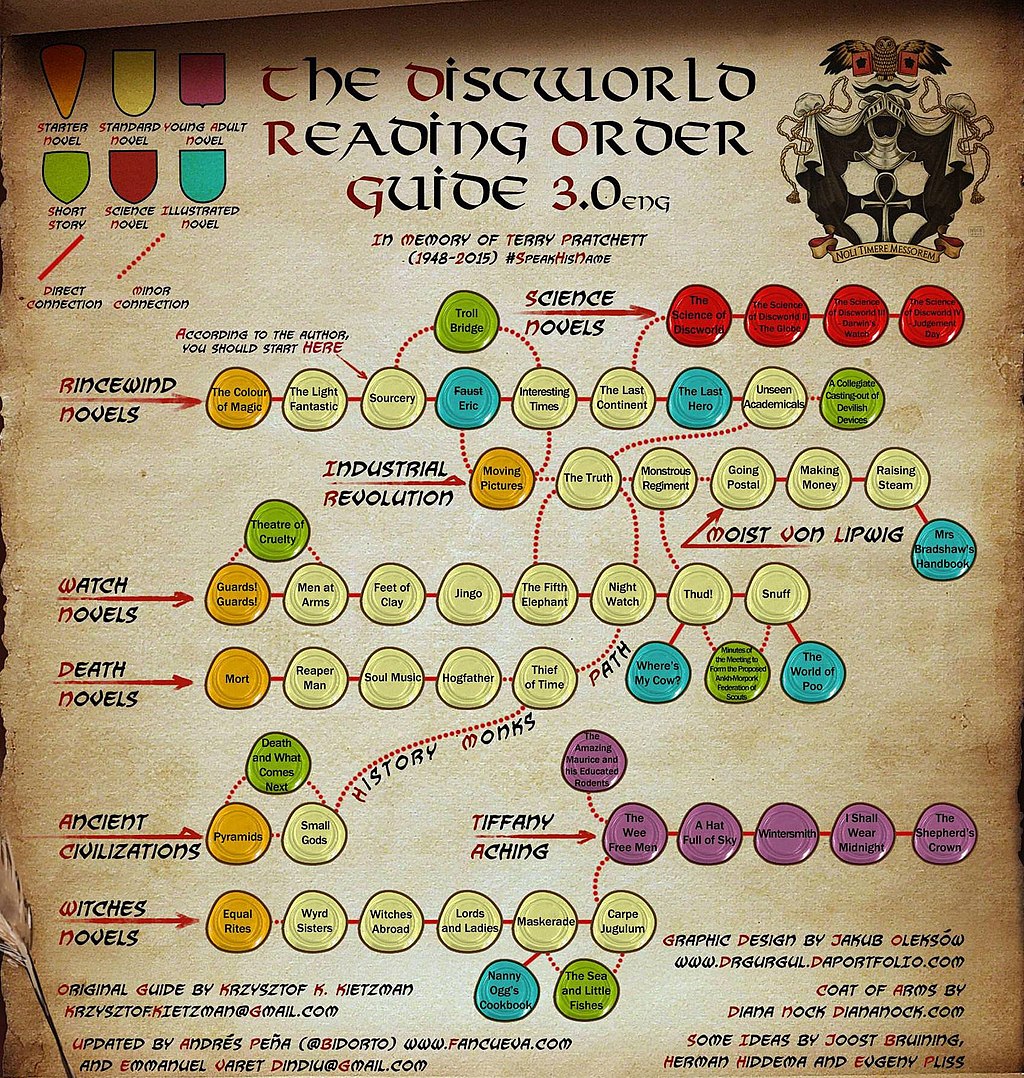 I haven't read all the books yet either, but I have enjoyed them. The humour is very wry and at times rather biting. I loved The Colour of Magic and have picked up most of the series (I think I need the last five or so) and am planning to more soon. I always intend to read right to the end, but get sidetracked by other things.
Deep Dark Space

I'm a binge reader and will happily read two or three books or even a whole series by the same author without breaking it up with something inbetween but most of time I do need a break.
After years of not being interested in Disc world, i read the majority of the books in the space of a few months, didn't need to break up with a different author. Had me in stitches, probably what I needed to lift me out the doldrums.

The thing I found about Pratchett and Diskworld was that he was absolutely brilliant at starting a book. Couldn't fault him for the first 2/3 of the book. But in my opinion his endings were rubbish.

Now nothing wring with that - He had me hooked for 7 or 8 books. I'd open it read the first couple of pages and probably be splitting my sides on my way to the till.

It was only later (100 pages or so into the book) that I'd realise what annoyed me.

However, even though I usually hated the ends it was still worth the cash just to be entertained by his humour and well crafted settings.