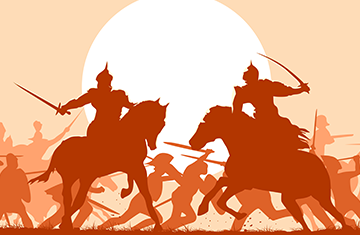 Ba Renzhong took a fresh horse from the military district and set out for Spotted Turtle Valley alone. A short distance into his journey he spotted a cloud of dust behind him. The Purple Demon tied his horse to a tree, unsheathed his sword and hid up the road, ready to ambush whoever was tailing him.

He kept his eyes fixed on the road, gazing like a hawk focused on its prey. But when the approaching horsemen drew near, instead of Colonel Ho, Ba saw men who had fought alongside him at White Wood Fortress.

“What are you doing here?” Ba called, emerging from the rocky wayside and sheathing his sword.

The soldiers, perhaps fifty in all, turned to face him. “Colonel Ba! We received a message from Major Cho to come and reinforce you, to help you recover your brother’s body.”

Ba mounted his own horse and beckoned for them to follow. “Good. But stay behind me if it comes to fighting. I’m going to get Ba Jiang’s corpse even if I have to carve my way through a thousand men.”