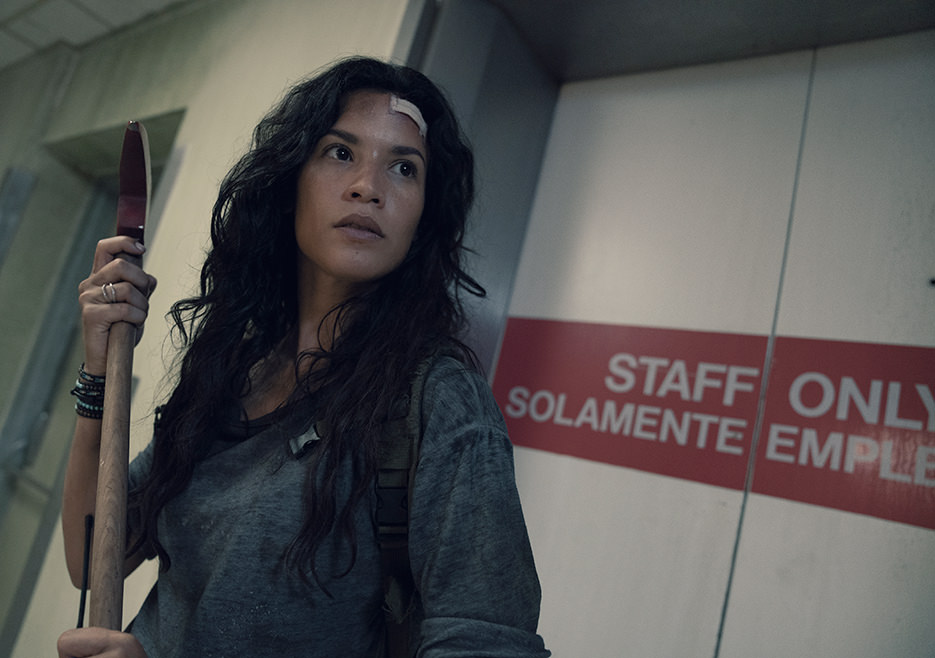 The group's hope falters as they seek a way out; Alicia and Charlie reunite with friends.
Click to expand...

Wonderful, emotional episode. I feel for Jimmy's loss and to be honest, I was swearing at him for standing on top of the world, pissing on the dead and refusing to release his recipe. I can understand the pissing part but at the end, if I had been in his shoes I would have felt mightily honoured for someone asking the recipe.

Jimbo's Bear Bo's is now immortalized and if they do it correctly the etiquette will the story of his survival. He didn't go out for nothing and his death didn't feel as wasted as some of the deaths in both series. His death gave him redemption as he also saved a lot of people. When Morgan ended going back on that roof I was shouting at the screen and swearing at his stupidity.

I would have never thought that the car batteries would have lasted over 700 days with a charge. The thing that is even more impressive is that Morgan did hit the car with one shot. It would have been even more excruciating painful, if he'd hauled more dead on the roof and it would have looked as if he was running out things. In practice I think it would have made sense to chop off the arms and legs, use them to find correct vehicles, and then do the zombie bomb as a finale.

To be honest I was crying for his decision on staying at the roof with dying Jimmy. Morgan has been with us since Rick came out from the hospital and I hope he is going to outlast him in the next season, if Martha doesn't get him at the season finale.

I don't really understand why Martha sees the dead as being strong, but she afraid of becoming one. When she was shooting at Alicia and Charlie, I really hoped that Alicia would had double tapped her after she saw that Filthy Woman had a hole in her chest.

It should be in the Zombie Survival Manual that anyone who is calling you with names and shoots at you, should be double tapped. Not tied loosely to a pole next arms, blades and whatnots. When Martha almost pulling her hand through the zip loops I was shaking my head as John as a former police officer should have realised that she was looking for to exercise prisoners rule number 1 - Always look for a chance to escape, when it appears you might not get another chance.

The thing that is even more distressing is that Al is somewhere near the vicinity of the hospital. She might have got out or then she might still be in the area, when Martha tattoos Jimmy's face with his recipe.

About Strand's and John's rescue, I know what Den of Geek review said about the depth of that flood zone. To the alligators I think that meter and half is an ideal depth. They don't need much more. Just enough for them to stuff the corpse under a rock or a sunken tree to rot and they're perfectly happy. The ZombieWagon is a perfect vehicle to cross that flooded pond. What doesn't make sense is that why Alicia and Charlie didn't load that canoe on top of the vehicle?

Another good episode, the determination not to leave Morgan behind, for so much death the show does have a feel good factor about it. Jim's demise like ctg says was not pointless.

The highlight of the episode for me was seeing the SWAT wagon plowing through the flood waters to rescue Victor and John. The only thing that could have made it better would have been seeing Old Wally Gator bob to the surface in its wake, wearing a flattening tread mark down his middle.
The escape from the hospital roof put a spotlight on the group's team spirit and ingenuity. Jimbo really redeemed himself with his car alarm jump. I wish he had made sure he landed on his head to avoid becoming just another walker.
Jimbo also redeemed himself by giving up his beer secrets to Sarah. It's a pity that he ended up wearing the recipe on his walker face.
Yeah, Alicia should have ended Martha when she had the chance. She is going to kill someone significant before she is taken out.

REBerg said:
The highlight of the episode for me was seeing the SWAT wagon plowing through the flood waters to rescue Victor and John. The only thing that could have made it better would have been seeing Old Wally Gator bob to the surface in its wake, wearing a flattening tread mark down his middle.
Click to expand...

LOL. I love that image, but I guess they never thought about it. I strongly believe John needs gator boots and Strand some luxury luggage for his contraband items. I loved when he splashed that 16 old single malt on John's wound. It was probably one of the most expensive antibiotic treatments you can have in the dead wasteland.

I still don't understand why they couldn't just walk around the bloody flood-zone that was shown in Martha's map? I didn't show that they were stranded in an island. Besides the point, why there was gators basking in the sun?

If Fear is really changing the tone with the new show runners, they should also allow them to have exotic beasts, like Shiva from TWD, but instead the Old Wally as John's pet.


REBerg said:
It's a pity that he ended up wearing the recipe on his walker face.
Click to expand...

It think it will make a nice collectors item, when ever AMC puts out collectables. It will be one of things that people might want to get as it's so close to our own culture. I know it sounds corny, but as a business prospect, it might be one of those highlights in the everything that AMC is churning out under a license deal.

I bet it will also be talking in Fancoria and other trade Horror magazines. It certainly will be in the Walking Dead Wikia zombie gallery. But yeah, it's a pity that he ended being Martha's pet. I was shouting to Alicia to take away her stick. She didn't. Instead she put it in the van, alongside of her as if it was convenient.

In her defence I can say, well, warrior princesses has to make mistakes too. They are not perfect.


REBerg said:
She is going to kill someone significant before she is taken out.
Click to expand...

Let's hope Jimmy turns on her. Handling zombies is a risky business. Michonne removed arms and lower jaws from her pets, before she chained them together. Martha deals with whole zombies. She only marks them, and retains zombie's full abilities. Including the scractch, which I think is pestering Al at the moment.

I want some of Jim's brew

Excellent episode. What I love about this series is that it nearly went the TWD route but it rejected the nihilism that plagued so much of the aforementioned series to go down a route of hope. I say this as a lover of all things dark. I hope FTWD does not loose it's element of portraying the good in humanity.

How big a time jump is TWD making? With the FTWD crew moving on to VA, and because of the time jump will they be on the TWD this year?

Timeline in both series confuse me.
FTWD began with the outbreak, we are now 4 series in but it's now roughly on the same timeline as TWD who are now starting a 9th series and began a few months/weeks into the outbreak.

By my calculations FTWD has had some massive leaps and TWD is moving at a snail's pace.

I think FTWD is now about where TWD stopped last year + six months give or take for Morgan to walk, run, drive to where FTWD are. It seems that if they went straight to VA that would put them in this season of the TWD, but I am not sure?

nixie said:
Timeline in both series confuse me.
FTWD began with the outbreak, we are now 4 series in but it's now roughly on the same timeline as TWD who are now starting a 9th series and began a few months/weeks into the outbreak.

By my calculations FTWD has had some massive leaps and TWD is moving at a snail's pace.

There are have being significant time jumps between seasons of FTWD. For example we do know how much time elapsed between the scenes on the dam and the group settling in the stadium.

It was either two years or six months, check TWD general thread for the answer. Fear makes steady jumps behind it, maybe possibly reaching it again and again. It's around day 700 and chance by my rough estimation at the moment in the Fear.


grip junky said:
With the FTWD crew moving on to VA
Click to expand...

Post-apocalyptic Austin, Texas will be featured in the next season as well. So it's not going to go away. They might have to find a brewing place and another truck for the beer deliveries as well.
Last edited: Sep 26, 2018