The trailer is up:


Not only a possibly interesting film in itself, but also how it relates to Infinity War (someone at work was talking about Skrull... )

Also, was that Agent Coulson in the trailer? I hope so!
If you find chronicles helpful, help chronicles: upgrade your membership to Supporter.

Brian G Turner said:
Also, was that Agent Coulson in the trailer? I hope so!
Click to expand...

There have been rumors that this will start tying things into a Secret Invasion storyline. That's where Skrulls have been slowly replacing people for years. Heroes, politicians, cops and military. Before the wars starts they all do just what they should, fight bad guys, arrest criminals etc.

It looks interesting but I doubt that I’ll go to the cinema to see it. I’ll probably wait for it to come out on Blue Ray.

I can’t deny that Disney have done a wonderful job with the MCU, but I do wonder how long they can go on for at this pace. Will they need to reset?

Ah - Coulson. Apparently the film is set - at least in part - around 1990. So it's a younger Coulson and a younger Nick Fury (hence the hair and both eyes present).

I was kind of hoping for a connect with the Agents of SHIELD TV series.

That's what a friend was telling me about, but that implies spoilers for Inifinity War, which I will get to see for the first time on Saturday.
If you find chronicles helpful, help chronicles: upgrade your membership to Supporter.

I do like the look of this film. I think my girls will like it, too.
If you find chronicles helpful, help chronicles: upgrade your membership to Supporter.

The MCU has been consistently good, so I may go to the cinema to watch this even though I can't say I've ever had a particular urge to see a captain marvel movie.

Must see, full circle with Infinity Wars. I think I am going to a second show, 4dx this time.

A quote is always memorable.

I'm watching this film on Thursday night locally. Quite looking forward to it.

The Marvel movie dudes have been saying she'll be the most powerful character. In the comic she's not more powerful than Thor. They've shown it more than once.

After watching her movie, I believe she started the movie with the powers of Captain Marvel (Ms. Marvel). When she got access to her full powers they gave her the powers she had when she was Binary. That would make her the most powerful.

We saw it today, didn't have any major expectations going in but my wife and I both really liked it. Didn't hurt that there was a cute 'cat' in it!

A quote is always memorable.

I've watched the film and feel that somehow we are being slightly cheated, it is as though they just make this one and then tempt you with a teaser for the next film. Yes it was action packed from the first, yet it was a disappointing result. I won't be watching it a second time, and most Marvel movies are the same. Is it just me?

My son and I saw this on Sunday, and both really liked it.

Ian Fortytwo said:
I've watched the film and feel that somehow we are being slightly cheated, it is as though they just make this one and then tempt you with a teaser for the next film. Yes it was action packed from the first, yet it was a disappointing result. I won't be watching it a second time, and most Marvel movies are the same. Is it just me?
Click to expand...

I didn't feel at all cheated, and I felt like this definitely stood on its own. You could easily pick this up and put it down a couple of years ago, pre-Infinity War, and you would lose nothing, I think - besides the post-credit scene there's not really much tying it the the events of Infinity War/Endgame. The only thing would be Fury's pager, and questions about why he doesn't call her at various points, but we already had that kind of questioning retroactively following the Infinity War post-credits scene anyway.

It's early days for sure, but I can see myself returning to this one - it was fun and breezy, but it also hit me square in the feels a couple of times. I'm by no means a Marvel completist - at this point I've not seen Iron Man 3, Thor 2, or Ant-Man and the Wasp, and likely never will. There's also a bunch of others I'll never watch more than one time, but there are definitely those I'll continue to revisit - the first Iron Man, both Guardians films, all three Captain America films, Infinity War - and I could see this finding a place amongst those.

I do kind of feel that your outlook on these may be starting to become the rule rather than the exception, however, and I do wonder if there will be a drop-off in interest post-Endgame, with the inevitable departure of RDJ and Chris Evans and some of the other original Avengers. 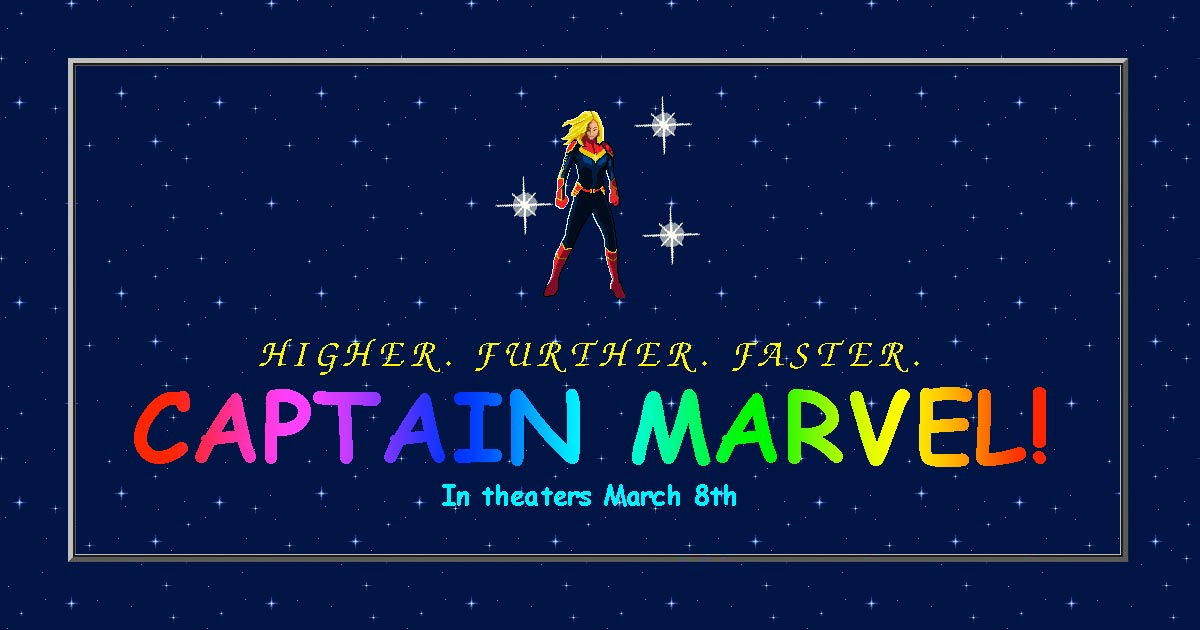 Set in the 1990s, Marvel Studios’ Captain Marvel is an all-new adventure from a previously unseen period in the history of the Marvel Cinematic Universe that follows the journey of Carol Danvers as she becomes one of the universe’s most powerful heroes.

Although he's changed a bit from the comics I have...

Although he's changed a bit from the comics I have...
Click to expand...