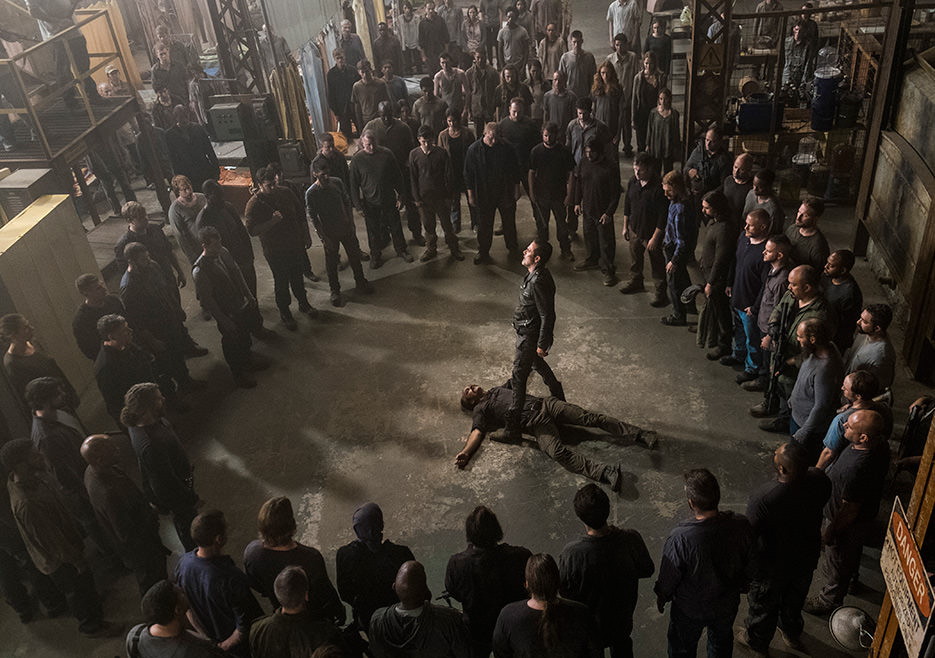 Simon, Negan and one hundred Saviors (Photo by Gene Page/AMC)

With the threat of the Saviors still looming, Aaron continues searching for allies; Daryl and Rosita take action and confront an old friend.
Click to expand...

The self-induced week long ban did kind of good for me. It wasn't the first time I've done it, and most probably not the last time either, even though the time in between is getting longer. There are times, when things just get overwhelming and I have to take the ban or the pile I would spill out would get me a permanent one. Yeah, I'm a bad one.

Just like Simon, Negan and hundred others that gathered together to witness the so-called leaders smacking each other. In the satisfactory grade seeing Simon going down was worth it, even if the tension would have got all time high if he'd escaped Negan's trap. He never was a brainy fellow. The anger got better of him but maybe the impossible situation that Negan has build into the Sanctuary just got better of him and he could for life of him think another way out from this catastrophe.

To be honest I think Dwight was always going to betray him and Simon was too stupid to see it coming his way. He couldn't even understand that Gregory was never going to be his best allay. I hope Maggie sees that because she order him into the holding cell. In times like the All Out War maybe the better resolution would have been locking him in the cellar under the main house.

Less chances you have to escape, less chances you have to cause harm. Dr Evil's escape was certainly one that shouldn't have ever happened. Rosita should had put a bullet in his head and stop the whole ammo production, because now it's going to cost the Ricknation dearly. In fact, I cannot believe the plot armour he's wearing, because in the bright day light he managed to escape Rick's best tracker.

How did he managed to pile all that ash upon his so fast and be so perfect on doing it, when most of his skills are academical and not straight out practical? We know for the fact that Dr Evil need people to keep him safe, because he's so hopeless otherwise. Why cannot he see it? Why he has to see Rick's people as his enemies instead of accepting his faults and misdeeds?

I think out of everyone Aaron's struggle at Oceanside was worth it. A lot of other people would have given up long time ago, because the ladies aren't really worth it. They don't even have vehicles to do a quick march to save Ricknation. Still, I think Aaron sees them as worthy allies. Maybe even as his redemption for losing his partner in this futile war. I thought he wasn't going to make it at the forest after he lost the consciousness in the muddy field.

Simon's death was very satisfying, he makes an amazing walker.

Poor Dwight, his sole purpose is too suffer.

Rosita should have put a bullet in Eugene.

Aaron hopefully has won over Oceanside, not sure if it's possible but may be they will swing the war.
Then again maybe the helicopter people will attack and Rick and Negan will have too join forces

Poor Dwight, his sole purpose is too suffer.

Rosita should have put a bullet in Eugene.

Aaron hopefully has won over Oceanside, not sure if it's possible but may be they will swing the war.
Then again maybe the helicopter people will attack and Rick and Negan will have too join forces
Click to expand...

I agree with you on all points except the last

Dwight is turning out to be the tragic hero of this series.

I want Eugene to die. He has shown liitle to none redeeming features in this series apart from Gabriel's aborted escape.

I do think it will be Oceanside who turn the tide in the next episode. Although from the trailer it might be Gabriel.

On this week's episode. I loved it, the series is building to a great finale.

I didn't see much difference between Simon the human thug and Simon the walker. His personality seemed to survive the transformation intact.

svalbard said:
I want Eugene to die. He has shown liitle to none redeeming features in this series apart from Gabriel's aborted escape.
Click to expand...

Actually he went and put sick, half-blind person in the assembly table, and then, I suppose he has now learned, bullied them into work. Dr Evil is removed from the comic person and spoiler alert, I wish Rosita will leave him alone completely - if he lives. With Georgie there is no need for him.


REBerg said:
I didn't see much difference between Simon the human thug and Simon the walker. His personality seemed to survive the transformation intact.
Click to expand...


nixie said:
Aaron hopefully has won over Oceanside, not sure if it's possible but may be they will swing the war.
Click to expand...

They gave weapons away and they have never shown possessing vehicles. I thinks some people are going to be upset if they save the war in the final.

I was half asleep when watching this but I think if it had been more exciting it would have livened me up. I was hoping there would be quite a bit of action in an episode 15. What was going on at Oceanside?? Is it possible they will suddenly turn up in episode 16 to save Ricknation? I agree with ctg that Eugene could not escape that easily, if at all.

That said the show keeps producing some good scenes inbetween the mediocre. The Dwight doublecross discovery was beautifully done. I thought if Dwight was to be caught it would be because his messenger messed up. Also the symbolism of having Dwight surrounded by Saviours, similar to Negan's sketch of the ambush, was very good. Simon's death was done pretty well, though that is a loss of one of the best characters.

The season final needs to be superb!

Judderman said:
Simon's death was done pretty well, though that is a loss of one of the best characters.
Click to expand...

There is a similar kind of character in the TaleTell's TWD game. I'd recommend any fan to play at least first two games after this season. They are heavily story driven and doesn't require gamers skills. But, as far as to get to decide Simon-like character destiny, that path is golden.

I can't see how they will be able to tell that the intel sent from Dwight is a trap. Unless, Daryl puts a block on it because he still won't believe in Dwight, but he will likely or not be overruled by the others. Occam's Razor makes the chances of double cross played upon Dwight himself by Negan too unlikely as a theory.

Negan, has got to be a little worried now about the quality and experience of the lieutenants he has left. All his best guys are now dead. I only vaguely recognise a couple of those left. Most of his remaining 'employees' are coerced workers; slaves really, with no loyalty to him, beyond a knowledge that he has fed and protected them this far. He is very weak and they must know that. So, this is make or break with him.

There is a very slim possibility that Eugene grows a backbone and they make all the bullets faulty.

Season finale tonight! I am just praying they resolve the Negan storyline this evening...IMO they desperately need to move on. There are other places this series needs to go, to seem relevant again. Hoping for the best, CC
You must log in or register to reply here.
Share:
Facebook Twitter Reddit Pinterest Tumblr WhatsApp Email Link
Top