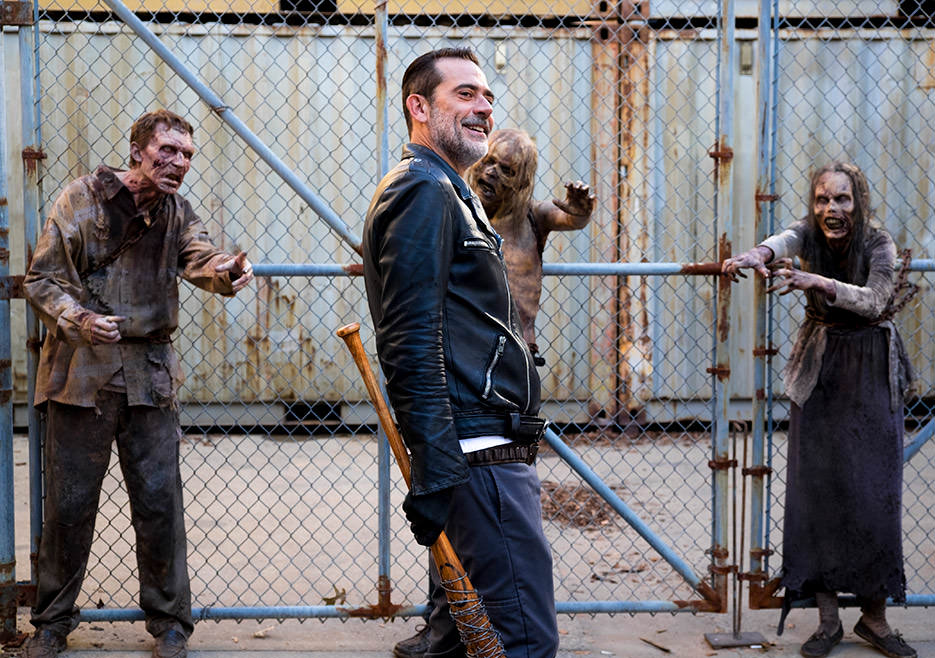 Negan and The Dead (Photo by Gene Page/AMC)

Daryl finds himself in bad company as his group heads to the Hilltop; Maggie makes difficult decisions at the Hilltop; Gabriel's faith becomes tested.
Click to expand...

Gabriel's perception of being under divine guidance continued to gain traction as the episode progressed -- right up until the doc got shot dead.
Shaken as he was, he didn't give up Eugene under Negan's no doubt intense interrogation. That surprised me.
Gabriel's character development has come a long way since he was that guy who locked his congregation out of the church to be eaten by walkers.

Another wonderful episode. I feel like the magic is returning and story moving forward instead of it being stagnated around the same couple of days. So the pacing in this episode was absolutely right and on top of everything else, they confirmed the survivalist theory. There are plenty of places around the Washington DC that the Ricknation can use to replenish their stock. In other words, the old world keep providing, even if it's not there any more.


REBerg said:
Gabriel's perception of being under divine guidance continued to gain traction as the episode progressed -- right up until the doc got shot dead.

Shaken as he was, he didn't give up Eugene under Negan's no doubt intense interrogation. That surprised me.
Click to expand...

That's faith. Pure and simple. I understand it might sound stupid, but when things have happened to me, they've followed similar kind of trend and the only explanation I can use is the God. And I believe Dr Carson was ready to accept faith the moment his life ended. Before that it was all pure logic and chaos.

The thing that Gabriel pulled with the gun was a miracle, as not only he was blind, he closed his eyes and the gun was wobbling in his hand. It could had gone the other way and Gabriel could had ended up leading the dead instead of being accepted into Dr Evil's bullet factory. But that is the thing that is so stupid, because Negan should have understood that you cannot make proper bullets with a slave work. The reason is simple as you need precise measurements, a lot of hand crafting to get matching ammunition. If you do it hastily and without consistency, you'll risk gunners life, losing the weapon and possibly whole lot of ammo, not talking about accuracy and rest of the things that can go wrong with the explosives.

What I'm surprised is that Dr Carson ended up dead for being a VIP. According to the WHO, there should be around 1 physician per 1000 people. If I use that number to divide the 1.6 million people that's left in the world, we get 1600 doctors left in the wild. I estimate that between the mother series and FTWD they've encountered around ten doctors. How many of them are alive and trodding around the US capitol? It cannot be that many. Therefore, Sadiq at the moment is a gift from the God, because the odds aren't in favour for the TWD crew to find another for a long while, unless the writers gift them another.

Maybe after the dust settles and Negan is sleeping six feet under Ricknation can commit to a medical training program that involves everyone. Let's hope the peace happens sooner than later as there are five episodes left in this season.

From coward to probably martyr, Gabriel's character development for me is one of the best the series has done.
Will sabotaging Negan's plans to use walkers to destroy Hilltop be Dwight's redemption?

Two good episodes in a row. Has TWD found redemption?

I was sorry to see Carson go, he had the makings of a likeable character. Tara is starting to annoy me. Unity is the way forward not going rogue, although it worked out in the end. Eugene continues to disappoint. Where once I thought he was redeemable his character arc has turned him into a thoroughly unlikeable person.

nixie said:
Will sabotaging Negan's plans to use walkers to destroy Hilltop be Dwight's redemption?
Click to expand...

This is the original run angle and I was slightly surprised to see it in the play, because they've devoted so far from the source material. When I read it first time, I shocked me as much as Shiva's death and finding that King Ezekiel was just an outcast actor, who had found the tiger at his lowest self-destructive moment. Its still shock me as we know there's no cure for the infection.


svalbard said:
Tara is starting to annoy me.
Click to expand...

She's angry but she's not projecting her wrath correctly. Instead she's like anyone us with her revenge schemes. Rosita should have known better then letting her out her sights. In fact, if she saw whole thing, she should have tried to stop Tara from committing a murder, when Daryl has shown show much of forgiveness. In other words I bet it's her selfness that annoys you. Am I wrong?

It was an up and down episode. Mostly good but I think the pace is still on a slow path due to all the isolated groups having their own segment of the show.
The death of the doctor was rather bleak. I thought being imprisoned again was enough. He suddenly gets a faith in God (or at least Gabriel) and then is killed when he wrongly believes everything is going to go miraculously well for them. Gabriel effectively killed him when he took him out of the Savior's compound.. Gabriel is idiotic really as he has shown many times. Well it does elevate Sadik's importance yet further to near the top of the tree, which supposedly will further justify Carl rescuing him.

Tara should be stripped of any authority. She didn't tell anyone about that riverside group with the guns in the past too. A bit of a shame that many of the few remaining long term characters are incompetent. Is the next episode going to be Negan turning up at Hilltop? He said tomorrow will be a big day. Or maybe that will be left to the finale. And Negan is still unaware of the massacre of the garbage people from the day before? Simon must have to strike against him soon.

So it is down to Eugene to save everyone? Or Rick and co will be enough to surprise the large saviors force?

After expending a bazillion bullets in the first couple of episodes of the season, the showrunners have swung back around to them being a scarce, finite, valuable resource.

And suddenly getting bits of walker in you is a virtual death sentence, even though for eight seasons these people have been walking around with cuts and scrapes and getting covered in walker brains and guts every other episode with no ill effect.

This show laughs in the face of internal consistency.

I wonder if he means that they do small injuries to people and then put the zombie guts in the wound to let them fester? Or injure them with gut smeared weapons. But yeah, people didn't seem too careful when they were slathering themselves with guts before.

At the moment I'm hanging on in the hope that the Negan storyline is wrapped up this season, and the show's quality will pick up again with a new showrunner in season nine. But this season had been a real slog for me. It used to be a must watch as soon as a new episode was out, but now it's more that I'll get to it when I've got nothing better to do.