8.10: The Walking Dead - The Lost and The Plunderers 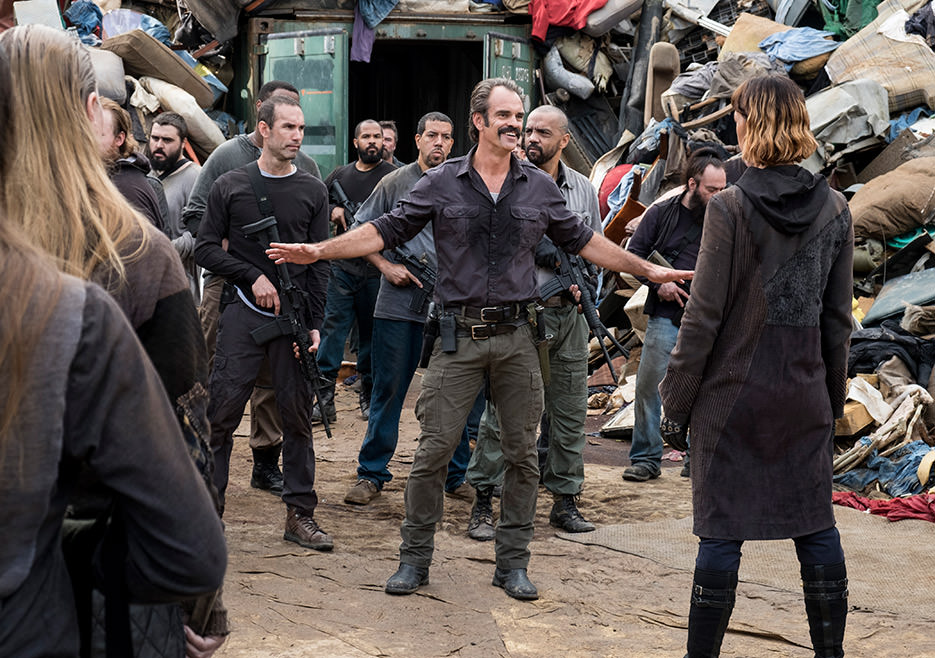 Groups unite their forces and converge on the Hilltop. Meanwhile, Aaron and Enid search for allies. Simon takes matters into his own hands.
Click to expand...

The method Javis chose to dispose of her followers turned walkers was shocking.
More shocking was her ability to speak in complete sentences.

I felt for Rick and Michonne even more than I did for the season opener. When the initial shock passes the sorrow moves in and it cripples people. I know from my own experience how it changes your perspective from normal to abnormal. It makes you do stupid things, like Michonne's need to stay to extinguish the flames from one of Alexandria's places.

If Rick hadn't been there I believe she would had been consumed by the dead as a result of her grief. In fact, if she'd said to Rick: "Forget the trash people," I think Rick might had listened as he was looking for excuses to skip out from this hell that has consumed most of his family. Everyone sees him as the leader, but under all those tears, sweat and grime is a man with a big broken heart. It is only a wonder how he's keeping it all together as when Loraine went, he started talking to the telephone people.

Maybe it's hatred that is keeping him together and prevents Rick from going totally nuts. I think many fathers in his case would have lost it and gone to do final mission at Negan's sanctuary. So, the plot armour is strong with our favourite MC's and I think it's good, because honest, if they'll go down the Fear route, most of the main cast will be gone by the end of the season.


REBerg said:
More shocking was her ability to speak in complete sentences.
Click to expand...

Yeah, that's what the shock does that you. You drop the character, whatever mask you have put on to cope with the horrors of Kirkman's world. It was such a relief to hear her as complete. And Rick's right, all of it was trashlady's fault. Her double dealings were the reason she lost her followers.


REBerg said:
The method Javis chose to dispose of her followers turned walkers was shocking.
Click to expand...

Brilliant. If she'd stayed the character she would have made some zombie burgers. So I guess we can consider ourselves lucky that the grief cleared her head. I'm also pretty sure she's going to her own version of "hell hath no fury" revenge concept. If the disposal method is giving any indication it might be brilliant. And if Jadis does a Fear routine, Negan is going to lose a lot of people.

Note also that after a long while I feel hope in the Walking Dead.

ctg said:
Brilliant. If she'd stayed the character she would have made some zombie burgers.
Click to expand...

Well, she was certainly efficient.
Did any of the trash tribe members survive? She's not much of a threat as an army of one.
I suspect Lucille is going to have her bloodthirst quenched when Negan learns of Simon's insubordination.

REBerg said:
Did any of the trash tribe members survive? She's not much of a threat as an army of one.
Click to expand...

All burgers. Ready for the BBQ.


REBerg said:
I suspect Lucille is going to have her bloodthirst quenched when Negan learns of Simon's insubordination.
Click to expand...

Who's going to tell him? Outside his and Rick's circle nobody knows and most likely nobody cares cos the trashtribe. Maybe it's a blessing in a disguise or then we'll see her again in the form of Whisperer.

Do not forget. Negan has eyes, ears, noses and throats everywhere. He'll find out somehow.

REBerg said:
Do not forget. Negan has eyes, ears, noses and throats everywhere. He'll find out somehow.
Click to expand...

Maybe Carol should dress on some of them. Sun Tzu infamously said all warfare is based upon deception. At the moment Saviors are organised and not even mostly disturbed by the fact they've lost so many people. To them it's like another day in Paradise.

I felt for Jadis, didn't think i would but i did, I'm surprised Rick left her, she was broken, dropping the pigeon English showed this. Rick abandoning her was a mistake, her grief has now been put aside probably for revenge and not just against Saviours, she will have Rick in her sight too.

I' m fed up with Negan and will happily see him destroyed but there is something likeable about him, Gavin was doing his job he didn't like it but did it anyway. Simon I really don't like I hope his end is slow and painful.

nixie said:
Simon I really don't like I hope his end is slow and painful.
Click to expand...

Me too. I would have taken Gavin over him as he's one that can be controlled, while Simon's just a bastard. I hope he'll get bit and survives so that he'll get to experience the agony of knowing nothing can be done.

On the kill-list: Negan, Dr Evil and Simon

I haven't said this much recently about TWD, but it needs to be said now. That was an excellent episode.

Great little conversation between Rick and Began at the end of the episode.

Question. Anyone know the watch Rick is wearing in the series? I am caught between a Hamilton or an Omega. I don't want to google it just yet.

svalbard said:
Anyone know the watch Rick is wearing in the series? I am caught between a Hamilton or an Omega. I don't want to google it just yet.
Click to expand...

I'd guess Omega but knowing for sure I would have to google.

ctg said:
I'd guess Omega but knowing for sure I would have to google.
Click to expand...

Just googled it and disappointed. Thought it would be a Hamilton, my personal favourite watch maker. It is not an Omega either.

svalbard said:
. It is not an Omega either.
Click to expand...

I'm sorry. I guess they had their reason to go with something else.

When you think of it, why does Rick need to wear a watch of any brand? So he knows when his time is up?

A relief to see a very good episode!

Simon and Negan's scenes were great. It seems Negan's showing more of his good side and a way to Ricknation may open up if Simon tries to take over. Though I don't see how Rick forgives him for all the killing.

Simon mentioned bullet shortage, as happens very occasionally, before ordering a mass shooting. Eugene needs to turn up with a stack of bullets.