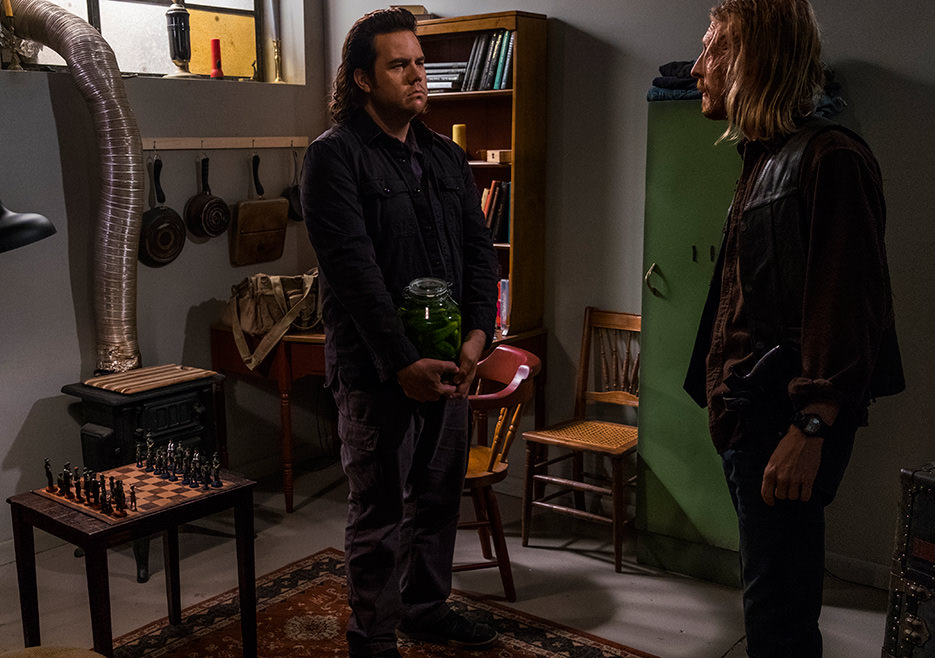 With war raging all around him, we get a close look at Negan and the lives of the Saviors during the conflict through a familiar set of eyes.
Click to expand...

Yeah. I expected them to continue with cycles on show Negan side on the war as well. To be honest I haven't been impressed by AMC's inability to show a coherent picture on how things unfolded since the end of last season. But then again in their defence I have to say that the comics were quite chaotic as well. I wonder did Gabriel survive or has he been mutilated by Negan?

Drama break. I liked the contrasting relationships -- Negan and Gabriel uneasily bonding; Rick and Daryl unraveling.
Interesting peek into what drives Negan and the Saviors. Who knew that he put such a high value on human life -- as a resource?
Back to non-stlop firefights next week? Pity that the big gun and dynamite went up in flames.

"I am here to take your confession!" Although Father Gabriel didn't shout it on Negan's face it came out with a force and dedication true to his profession. I don't think there's any more bone chilling thing to do than take a confession from a proven killer and hear them telling the truth first time.

Negan had no choice but to put aside his idealism and use it to get Gabriel out from the tight spot. But the thing is I believe he could have made his way inside the Factory and leave "Gabe" behind once he was in trouble. Instead of letting him die horribly he saved the preacher. As if he's part of the "Human Resources."

Maybe some part of him understand that he needs the Living to reach the "Grand Finale" as he claimed. It is just the way he'd reached this point has driven him deep into the villain part, instead of making him some sort of anti-hero. When the World-As-We-Know-It ended, and this new reality took the place, he must have seen all those same opportunities as everyone else. And he loved the way how he could get away by using his ability to terrorise people into submission.

Inside the Factory as soon as it became clear that Negan was gone, the people immediately rose up to a brink of a revolution. To be honest, if Negan hadn't come out from around the corner, they would have stringed up Simon and other Lieutenants from the rooftop. They had numbers and determination on their side to do same thing as what happened to the contracts at Fallujah. The only thing that the Workers didn't had was the anger as they took knee as soon as they heard the whistle.

So Negan is right. They are sheep. But what he's wrong about is this whole thing of him saving them through death. That is all propaganda he must have cooked up in his head in order to make people to fall under his rule. Rest as he said is a stage play.


REBerg said:
Back to non-stlop firefights next week? Pity that the big gun and dynamite went up in flames.
Click to expand...

I don't know. I think they're moving up and settling things that this fight has brought up before they bring up the mid-season final in three episodes. I believe next two episodes will be focusing on Alexandria and Hilltop, while what's happening at the Factory moves behind.

Did I see a helicopter?

Are we now going to see another group of previously unknown survivors?

Or is this the introduction of The Whisperers that I've seen mention of?

Negan, how much of what we see is really him or is it a part he is playing to keep control and people alive ?

I'm getting fed up with his potty mouth, surely it's a bit over the top.

nixie said:
Are we now going to see another group of previously unknown survivors?

Or is this the introduction of The Whisperers that I've seen mention of?
Click to expand...

Yes and maybe. But I don't think it'll be introduced during this war. It would confuse the plot quite a bit and there are things that needs to happen before this is all over. The Whisperers are coming but not in this season. They are really creepy. Saying more would be spoiling.


nixie said:
Negan, how much of what we see is really him or is it a part he is playing to keep control and people alive ?
Click to expand...

I really don't know. What you see is what you get, minus the f-words.

After some travels I packed in all 5 episodes in one evening. It wasn't great but was better and of course very different to season 7. Much worse than season 6, and the declining viewing figures show that is a common opinion.
As others mention there are more holes in the story than a Swiss Cheese. Some things are mentioned as issues and then seem to be forgotten. We have to try and ignore some of this to enjoy the show. There has been some enjoyable action. Episode 1 was pretty good and episode 5 actually had some good chat between Negan and Gabe. But the chances to have Negan killed off just keep coming and going. Gabriel massively messed up yet again. I would have hoped ideally that Negan would be finished by midseason but as expected this story seems set to run on for the whole season. There is too much stagnation.

I was glad to see most of The Kingdom fighters finally being eliminated along with the Tiger. The King speeches and Tiger stuff were just too comic booky and tacky, and don't translate well to a TV series. A bit like a lot of the Preacher TV series.

I'm looking forward to see what Eugene's big influence will be. Perhaps he suspects the treachery against Negan. It appears like that from the way he was wandering around Dwight's room.

Darly and Morgan are both very different but both in a similar direction with their disregard for life of anyone associated with an opposing group.

Rick and Daryl driving behind the truck being shot with the Gatling gun and not hit was rather absurd, but good fun. I think the big gun not being set up yet and them being shot at with normal guns would have been a bit more believable.

Judderman said:
Rick and Daryl driving behind the truck being shot with the Gatling gun and not hit was rather absurd, but good fun.
Click to expand...

Was not a gatling gun

escaping this gun, and getting only hit at the front grill from a gunner, who wasn't aiming I can understand.

This season is appalling. It's nice to see some slim victories for Rick et al but I really need to see the end of S7 again as I think I must have totally forgotten. In my memory Jadis betrayed Rick at Lastminute.com and everything fell apart. I start watching Season 8 and for the first episode I'm wondering if Rick is having an unrealised flashback, or fantasy. I kept waiting for the film to cut to him sweating and feverish on the edge of death like Gabriel in the cell. But as it went on (I mainlined the first 5 like @Judderman ) I realised it was actually happening and my memory was probably at fault. But then all I could think of is if their guerilla ninja assassin techniques worked so well now, why didn't they do this last time?


nixie said:
I'm getting fed up with his potty mouth, surely it's a bit over the top.
Click to expand...

For me it's not his swearing but his constant reference to his and other peoples' dick size which now has the opposite effect; if a man goes on about it all the time, the way Negan does, you know he's packing cocktail sausages.


Judderman said:
The King speeches and Tiger stuff were just too comic booky and tacky
Click to expand...

'The King and Tiger' is sure to replace Jump the Shark in common fandom, I am convinced. Gregory and Ezekiel became Jar Jars.

Whatever happened to this series?

Phyrebrat said:
For me it's not his swearing but his constant reference to his and other peoples' dick size which now has the opposite effect; if a man goes on about it all the time, the way Negan does, you know he's packing cocktail sausages.
Click to expand...

Or then he is one of those selfconsious, who has got their dicks gone in their heads and they are advertising the fact to everyone as if they're morons. You see this sort of thing happening all time with body builders as what they do overrides all of their thinking. For a kindergarden teacher he has made 180 degree turn to his old ways. Almost similar way to the Governor.


Phyrebrat said:
Whatever happened to this series?
Click to expand...

According to the law suits money went into AMC executives heads and they started meddling with the business like TNT back in the days when they were producing The Legend of Rangers and The Lost Tales and so one. But the atrocities are not on similar. To me they've done reasonable job on making things clearer since the failure of last season. They could however do much better job on making the All Out War period clearer than the chaos that has consumed first four episodes.