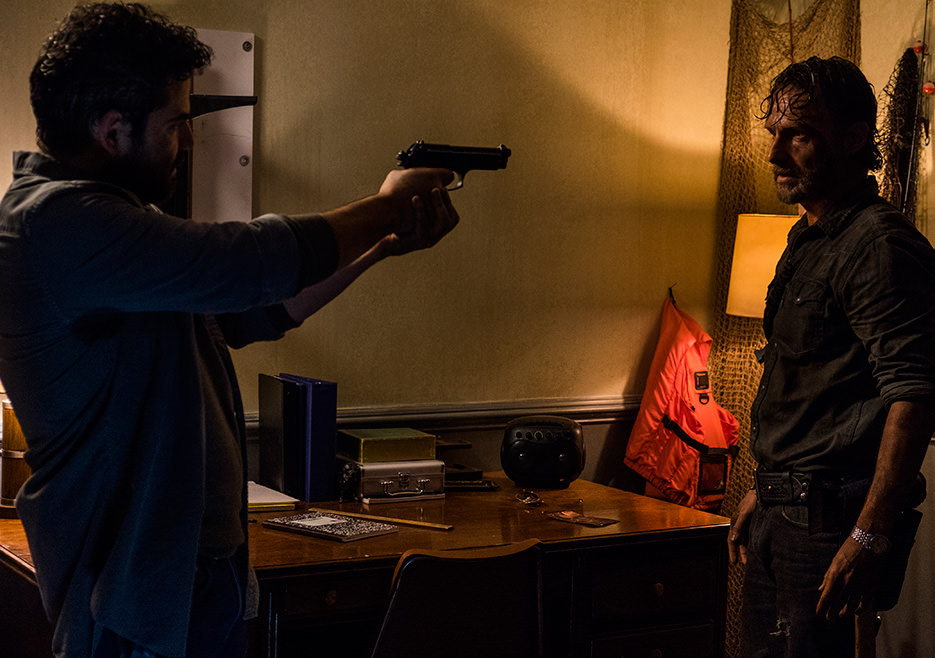 Conflict with the Saviors leads to unintended consequences for the Hilltop, the Kingdom, and Alexandria; morality proves tricky in wartime.
Click to expand...

Well Morales wasn't back for long. I couldn't help but think his conversation with Rick might make Rick re-assess his actions. Nothing will get Darryl to think twice about his, though, it seems.

I don't like the direction they've taken Morgan at all. He was more interesting when he refused to kill. More annoying, too. But this mental Morgan, I just find unconvincing. Also, why didn't anyone try and stop him and Jesus from fighting? 'It's fine, they're both ninjas, they know what they're doing. Let's just quietly lead these prisoners away, and come back in ten minutes when they've settled this. You know, like ninjas.'

Ezekial was tempting fate far too much to get away unscathed. I just hope the tiger is okay.

Culhwch said:
Ezekial was tempting fate far too much to get away unscathed. I just hope the tiger is okay.
Click to expand...

I see most of the saviours as unprofessional militia force, who weren't ever trained to fight a war against the living. Ezekiel the King is an interesting character because he believes in his mission and he gives hope to his people. And he has on his side one of Rick's most capable killers, Carol - the housewife.

I'm surprised by her transformation from teetering on the edge of darkness psycho just moment away from determing all living as the enemies to a capable fighter, who can strike on flanks or rear elements. Still, she doesn't advice the King on use of mines or other things they should have been able to fashion from their arsenal.

The scenes depict that Ezekiel commanded the overall strategy for the Kingdom side, while Alexandria's best fighters were distributed between the fighting elements. The only strike I saw as dangerous was the first one on the flank by Carol. They could have shot their own forces, but luckily the King understood to go down as soon as the fighting started.

To be honest, I don't understand why Saviours moved through the forest in a blob formation, without side or rear guards knowing that there were enemy combatants in the area, not just the zombies.

For dead alone, blob is good, but when there's living among them, you just have no choice but to adapt military tactics. Something's that Carol has learned so well from fighting next to Rick. Back in the Terminus incident, she used superior tactics - alone - to take out the train yard. And if I'm really honest, she should have used that same thing against the Saviours HQ.


Culhwch said:
I don't like the direction they've taken Morgan at all. He was more interesting when he refused to kill. More annoying, too. But this mental Morgan, I just find unconvincing.
Click to expand...

I believe that in order to kill Morgan had let out the monster that he hid with the help of Dr Eastman. The loss of Benjamin made him to demolish all those wall he'd built to keep that monster away. So, when Jared ran, the chain-of-men only presented him a target and something for him to gain redemption.

It is a darkness that is sawn often in the battlefield, when the soldiers feel righteous for executing unarmed people. They only see targets. Not someone they are protecting. As harsh as it sounds losing enemy prisoners in the ambush situation, people feel they're committed to do rightful kills to prevent them from joining the opposing forces.

Jesus saved them, because if you'd have popped in Morgan's mind, he would have seen the woods full of targets. Dead and the Living. Jared's chain, with the influence he's able to put into those people, was the most dangerous. I would have shot them as well since everyone was firing when the dead started rolling down the hill.

I think Jared joining Gregory later time would be the worst thing that can happen. With Morgan on his heels the chances for that to happen is minimal.


As a personal note, Aaron's loss was so heartbreaking. But it felt good that thing for rest of his life is to raise Grace.

They did a good job of showing how far our people have gone, but Rick, however weird he went last season, is not Negan. Rick would not kill anyone in the same way Negan killed Glen and Abraham. He would have probably let Todd (I'm a man of my word) go, but Daryl didn't give him a chance. So, you would expect that the rank and file Saviours might now start to defect at this point. It doesn't look that way. Morales wasn't exactly brainwashed by Negan either, he just thought he had the better chance of living if he stuck by Negan, so I expect those outside the Hilltop feel the same. While they still feel that way, they are just too much of a danger to let them inside. This battle is never ending.

Dave said:
This battle is never ending.
Click to expand...

It has an end. Promise. But things with Negan tends to go over the top.

Aaron I hope he is giving a chance to rear Gracie, I like him.

Mercy for the saviours, I'm starting to agree with Tara and Morgan they need killing can't be trusted.
The prisoners may cause friction between Rick and Daryl. Rick may want to give them a second chance but Daryl will likey feel it's too dangerous.

Big mistake letting Gregory back inside Hilltop. He'll be useless as a defender, and somebody is going to need to keep an eye on him.

REBerg said:
Big mistake letting Gregory back inside Hilltop. He'll be useless as a defender, and somebody is going to need to keep an eye on him.
Click to expand...

I agree, I'd feel safer letting the captured Saviours inside than I would Gregory.

I think everyone except Jesus feels they are going to cause something at later point, because there cannot be any other outcome. The civility went out the window the moment Negan swang Lucielle first time. But to be honest, we have been here before, two seasons ago, when they just got to know Saviours for real.

A lot of the tactics on both shows kill me. Moving in a big bunch, not in a staggered column or cigar in the woods with no dispersion for me it is hard to watch. The king and his crew after the raid lollygagging about. I try to ignore all that. For me them not having a plan about taking prisoners is dumb. Kill them all is no plan, that makes it so the Saviours have to fight to the last man. Pulling out the true believers and trouble makers and killing them on spot and treating the others overly nice would be a much better way to go.

grip junky said:
Pulling out the true believers and trouble makers and killing them on spot and treating the others overly nice would be a much better way to go.
Click to expand...

They should have done this purge in the woods and not at the Hilltop.

None of them should be any where near the hill top. They should have planned a neutral spot. When trouble makers come to light they die on the spot where ever that spot is. The shows have been good so far
You must log in or register to reply here.
Share:
Facebook Twitter Reddit Pinterest Tumblr WhatsApp Email Link
Top