Anyone watching (or watched) the new(ish) Daredevil series on Netflix? I'm three episodes in, and happen to think it's pretty bloody good.

Much better than that pile of skag Ben Affleck associated himself with.

It seems to owe much of its feel to the Jason Bourne movies, and also has a touch of Park Chan Wook thrown in for good measure, with some hugely impressive tracking and long shots, and choreography. It seems to be a much more grown-up vision of a Marvel setting, moreso than the slightly cartoony feel that the movies (necessarily) retain. Looks like once again Netflix shows what can be done with creative flexibility.

Charlie Cox makes for an interesting MC, though I think we could do without the constant flashbacks - unless they have some greater relevance I don't yet see.

Plus it has Debroah Ann Woll in it. Mmm. Deborah Ann Woll. She's my favourite.

I really enjoyed it. I like Charlie Cox; in fact, I think all the cast did a great job. Season 2 is next year, and in the meantime Netflix has Jessica Jones in November, I think, which will eventually tie in with Daredevil.
jspinkmills.com

The fight with the Russian mobsters in the hallway was a wonderful piece of action.

I've seen the entire first season. I think this is one of the best new shows around. Up there with Gotham. Looking forward to season 2.

Apparently it is set in the same Marvel Universe at the films but does have that far darker feel so far. I prefer it, and can't see how they'll align the two when the inevitable tangling of storylines happens. My guess is that they'll default back to the vibrant cartoony world of the films, but I can't help but wonder if, say, Iron Man had been done with this sort of feel.

Or would that seem like Marvel were encroaching a little into DC-type territory?

I watched it. And it was okay, I guess. I had trouble getting into it for some reason. It just didn't engage me in ways MCU usually does. I loved Agent Carter from the start and Agents of SHIELD kinda grew on me by the second half of Season 1, but Daredevil only engaged me sporadically. While I can't specify any tangible, significant flaw of Daredevil and it actually seems like a pretty good show when I look at it some a more objective stand point, I didn't really enjoy it. It has moments where it really had me hooked, but then something would happen and I'd just drift away and wouldn't get hooked until half the episode passed. Maybe I should re-watch it at another time and reassess it.

Another thing, since Stick and Elektra will be in the series, will either one of them bring the Hand into the Hell Kitchen?

Looking forward to it!
jspinkmills.com

I envy you Juliana. You only get to see a great show for the first time once. That's not as deranged as it sounds. (I hope).

Marvel and Netflix bosses has seen the second season and they've sanctified Netflix to make Punisher out from it. I'm intrigued to find out how good Jon Bernthal is in the title role. Too bad there's no word about Elektra.

Does this mean Frank Castle will be constantly rubbing his head?

Vladd67 said:
Does this mean Frank Castle will be constantly rubbing his head?
Click to expand... 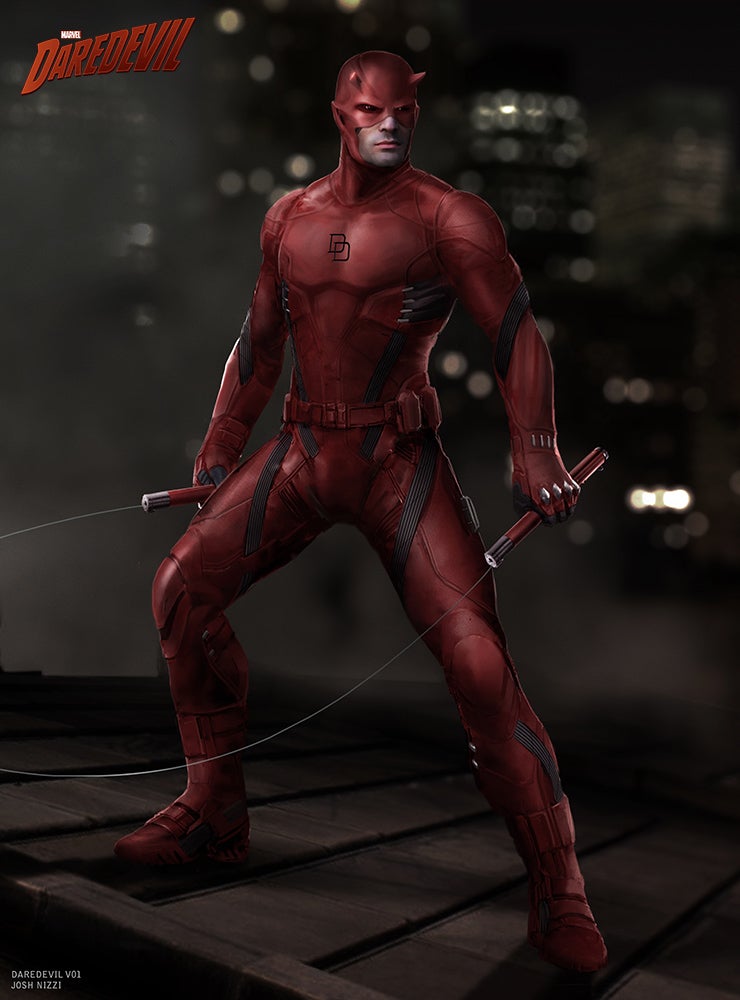 Daredevil has been a huge success in terms of bringing the Devil of Hell’s Kitchen to life—but if there’s one sore point for a lot of fans, it’s the final costume, built up to over the course of the first season. But as Josh Nizzi’s fantastic concept art shows, the final suit could’ve been a lot closer to Daredevil’s classic red spandex.
Click to expand...

*whispers* I kind of liked him in his blacks...
jspinkmills.com

Juliana said:
I kind of liked him in his blacks..
Click to expand...

Traditional look, or the one similar to his apocalypse run. Yes, I kind of liked it too, but I prefer the original red spandex suit. With horns and everything.

They could have gone with the vintage, yellow and red costume....that would have been intolerable!

(Who am I kidding...I would have still been crazily enthused for the coming season!)


Did you notice Frank Castle wasn't wearing iconic skull emblem? Also at one point it looked like DD's armour has fixed around his nose.

Me too! I only recently finished watching the first season. I was surprised, actually, because generally I preferred the more unconventional approach of Jessica Jones, but I got more and more addicted to Daredevil as it went along. In the end I had to force myself not to watch it too quickly. I thought the finale was a little predictable (unsurprisingly, perhaps) and lost a little of what I had enjoyed in previous episodes, but everything leading up to it was fantastic. I especially loved Vincent D'Onofrio's performance throughout - I felt like Fisk was fighting to contain his rage in almost every scene
You must log in or register to reply here.
Share:
Facebook Twitter Reddit Pinterest Tumblr WhatsApp Email Link
Top