The Flash S118 All Star Team Up

I thought Eddie, Joe and Barry teaming up to open the episode was cleverly shot. Some of The Atom and Felicity interacting with the S.T.A.R. Labs team was fun. Nice to see Emily Kinney show up as the Bug-Eyed Bandit. Bee puns! I wonder if Cisco remembering the alternate timeline might somehow lead to him getting powers like Vibe in the comics. Glad to see Caitlin and Cisco in the know about Dr. Wells.

Yeah, I'm not sure why Cisco should be getting these flashes (no pun intended) when no one else is - maybe because his was so traumatic, but I'm sure there was plenty of trauma to go around in the other timeline - but I did like they way they put that to good use. It made his agreeing with Barry about Wells very plausible and that did the domino thing for Caitlin, so rather than "*gasp* no, not Dr. Wells - well, okay, then again you're right," this gave them a reason to believe. Plus it was just plain creepy and weird. And, since I don't watch Arrow, any excuse to bring Felicity on is good. So that's the "A" story if the other is the "Bee" story, right? "Beeee careful." I didn't really care for that storyline - Barry taken out by bees? The handy-dandy defibrillator is good for only one use and Cisco can't repair it real quick? Etc. But this was much better than they've been lately. (This is Big TV Night for me when I watch three things and all of them were better than usual.)

But why is Iris being such a bitcah? I get her point of view in a mild sense, but I thought Barry was very convincing and thought she'd chill out.

And here's my spectacular comics ignorance again - what's an "Atom" and why hasn't he been sued by Iron Man? A suit lawsuit.

I thought it wasn't that great for a cross-over episode - I would think they'd say the cross-overs for the 'big' epic episodes. And with the lead-up to the final episodes I thought they would start ramping up to the finale. But, still really enjoying the show

J-Sun said:
And here's my spectacular comics ignorance again - what's an "Atom" and why hasn't he been sued by Iron Man? A suit lawsuit.
Click to expand...

Hah was thinking the same thing! Seems like one of the superhero's DC copied from Marvel back in the day.

If Sisco's memories of the other timeline are present because it was an emotional/traumatic experience I wonder how long it will take for Iris to have the same happen to her and remember that Barry revealed his secret to her. As for Ray Palmer (The Atom) the are working him towards his actual superhero power, which is the ability to shrink down to subatomic size and have increased strength among other skills at that size. Though right now his suit is very ironman-like and bulky. 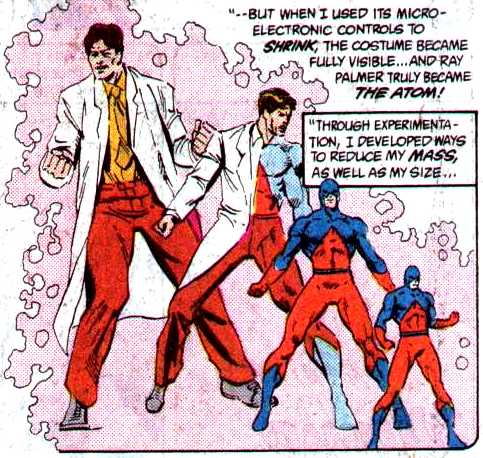 So he's a copy of both Iron Man and Ant Man - and played by Superman :S

The Atom was created in 1961 and Ant Man created in 1962. Beside The Atom can shrink down to subatomic particle size, while Ant Man can only go down to ant size. Though Hank Pym can also increase to become a giant. I do detest the suit The Atom uses right now on Arrow, but I think we are meant to not like it, as they will eventually change what he can do. Speaking of Superman, wouldn't it be great if Tom Welling (Clark Kent) or Allison Mack (Chloe Sullivan) from Smallville made an appearance. I know I'm grasp here, but really why not? All they need to do it hint at being the same characters or would this cause a breakdown in the fabric of space-time, since there was their own version of Green Arrow on Smallville?

Was really disappointed by the spoilers in this episode - I thought the Flash/Arrow cross-over would begin with the Flash episode, as happened last time.

But because we're a disc behind, we suddenly see that Ray and Felicity are a couple, Ray has got his power suit running - oh, and Felicity dropping a disc's worth of Arrow spoilers.