next Shannara trilogy will be the final one

Really loved the Shannara books from Sword through Voyage and Genesis.
But the series has woefully stagnated, so glad to see Brooks end it gracefully and start something new.
Last edited by a moderator: Jan 20, 2015

I've edited the link to make it live.
Become a Supporter Member for self-promotion and signature benefits: Upgrade your account here

Location
My own little adventurous world

It's not the end of Shannara ! I have just pre-ordered on Amazon the new book The Black Elfstone announced for June 2017. If my memory is still good, this stone was recovered by Walker Boh from Uhl Belk, the master of Eldwist.
Z

Alexa is correct. It's only the end of the Shannara timeline. Brooks basically said he didn't want to go the way of Robert Jordan, and not have his series have an official end before he passes. So the last three books will be how the series ends, but Terry will go back in the timeline and write some books filling in certain gaps. The one he's teased for years is a book that takes place during the time of Galaphile and the First Order of the Druids.

That will be one book I will wait for. I have always wondered about Galaphile and how he ended his life in Shady Vale.

Book Description for The Black Elfstone

Coming in June. the cover and back blurb was released recently.

It seems to be a 4 book series.

"The Four Lands has been at peace for generations, but now a mysterious army of invaders is cutting a bloody swath across a remote region of the land. No one knows who they are, where they come from, or what they are after—and most seem content to ignore these disturbing events. The only people who sense a greater, growing threat and wish to uncover the truth are society’s outcasts: an exiled High Druid, a conflicted warrior, a teenage girl struggling to master a prodigious magic . . . and a scrappy young orphan, improbably named Shea Ohmsford."

Two months left. The Fall of Shannara title doesn't look promising for generations of heros from this family.

The first book of the triumphant and epic four-part conclusion to the Shannara series, from one of the all-time masters of fantasy.

Across the Four Lands, peace has reigned for generations. But now, in the far north, an unknown enemy is massing. More troubling than the carnage is the strange and wondrous power wielded by the attackers—a breed of magic unfamiliar even to the Druid order. Fearing the worst, the High Druid dispatches a diplomatic party under the protection of the order’s sworn guardian, Dar Leah, to confront the mysterious, encroaching force and discover its purpose.

But another crucial journey is being undertaken. Exiled onetime High Druid Drisker Arc has been living in quiet seclusion, far from the politics and power struggles of his former life, until two brutal attacks by would-be assassins force him to seek out an infamous murder-for-hire guild—and find the hidden enemy who has marked him for death. At his side is Tarsha Kaynin, a young woman gifted with the wishsong and eager to be schooled in its formidable power by a master. She, too, is pursuing a mission: to locate her wayward brother, whose own magic has driven him to deadly madness and kindled his rage for vengeance . . . against his sister.

In their darkest hours, facing dangerous adversaries, the lives and quests of Dar Leah, Drisker Arc, and Tarsha Kaynin will be inextricably drawn together. And the challenges each confronts will have resounding consequences for the future of the Four Lands.
Click to expand... 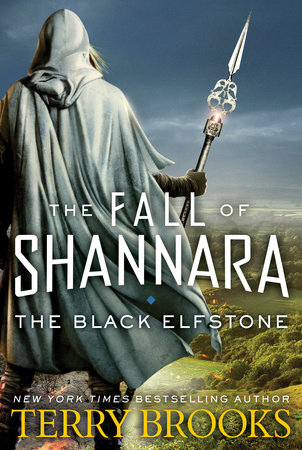