Browsing Around in Pre-1975 Anthologies Other Than Conklin's

I have read Sloane's two novels, and found them to be fascinating mixtures of mystery, science fiction, and horror. Quite well written and ahead of their time for the Thirties. (The Edge of Running Water was made into the interesting Boris Karloff film The Devil Commands. The film doesn't capture the cosmic vastness of the book's final vision, but it's an offbeat little thriller.)

Sloane may have liked to end his stories with a lingering element of mystery.

in To Walk the Night, we are left unsure of just where the possessing intelligence came from -- the future, another world, another dimension? As I recall, in The Edge of Running Water, we are left unsure of the final meaning of the glimpse of darkness, or even if this a glimpse of the final nature of things (right? -- it's a while since I read it). And the short story doesn't tell us whether the new planet turned out to be a good habitation for human beings.

The John Christopher story in Sloane's anthology was called "Socrates," the name of a mutant dog. The mutant has the intelligence of a human beings and sensory perceptions beyond those of humans, but retains the instincts of domesticated dogs.

I hate to boast (Yeh! Right!) but I have nearly all of the books and mags. pictured.
All I can say is YIPPEEEEEEEEE !!!!!!!!

That's what comes of 40 plus years of collecting.
Now all I need now is to win the lottery so I can buy a bigger house as I am rapidly running out of space.
Now is that too much to ask?

Does anyone know this early paperback anthology?

According to Contento index --

Yep, got this one.

Aimed at libraries serving juveniles was Alfred Hitchcock's Monster Museum (1965). I'm sure I'm not the only person who remembers the rather creepy and enticing designs on the dustjacket and accompanying the stories. I propose to read some or all of the stories and comment here. I'm sure I didn't read all of them. "The Day of the Dragon" by Guy Endore is the first. A scientist who resents others' lack of appreciation has found that a surgical modification to the hearts of alligators enables them to become gigantic, flying, rapacious saurians. It seems this acquired characteristic is heritable. Members of mankind who aren't killed by the dragons are starved to death are doomed to live in caves and subways. The main concept is a bit bleak -- and the vocabulary must have been above many youngsters. Reading it now, I seem to detect suggestions of a tongue-in-cheek quality that probably went by the young reader of circa 1967.

Gosh. I think I may have read this one at a young age, since I have a memory of encountering the Stephen Vincent Benet story "The King of the Cats" at about that time. I don't really remember any of the other stories.

Do you remember "The King of the Cats" as any good? It didn't get off to a start that interested me, and I'm sure I wouldn't have read it back in the day. There's one story in the book that made quite an impression... more about that soon.

Skipping "King of the Cats" and saving "Slime" for later, I came to "The Man Who Sold Rope to the Gnoles" by Idris Seabright. What is this doing in a collection of stories aimed at readers aged twelve or so? It's a "sophisticated" story about a commercial traveler who dutifully reviews the principles of effective salesmanship before going to the door of the gnoles, whence, admitted to their house, he sets forth the merits of the various kinds of rope that he sells. Me makes the sale and is offered a magnificent emerald but turns it down on ethical grounds as too valuable, and, seeing a couple of small gems, suggests them instead. These happen to be spare eyes of the gnole, so the creature wraps him in its tentacles and imprisons him. He is fattened and eaten. The story is in the manner of Dunsany's "Hoard of the Gibbelins" (to which the story contains an allusion -- in fact the story is probably best considered as an imitative tribute to the earlier tale).

Did an arch tale like this belong in a book aimed at middle school-age kids? I don't mean that the story would give them nightmares, although the illustration is creepy. But is it a good idea to bait kids with the promise of scary stories and offer them instead a clever-clever bit of irony?

Let's suppose that many youngsters have a capacity to enjoy what Burke called the Sublime. Development of that capacity may enable them to enjoy some of the world's greatest literature, such as The Rime of the Ancient Mariner, etc. Below that level but still perhaps worth reading are many stories of the eerie and the marvelous. Seabright's story invites a smirk. I wouldn't have included it. In any event, shouldn't someone read "The Hoard of the Gibbelins" first?

By the way, did the endpapers of Monster Museum inspire the design of the Jawas in Star Wars? 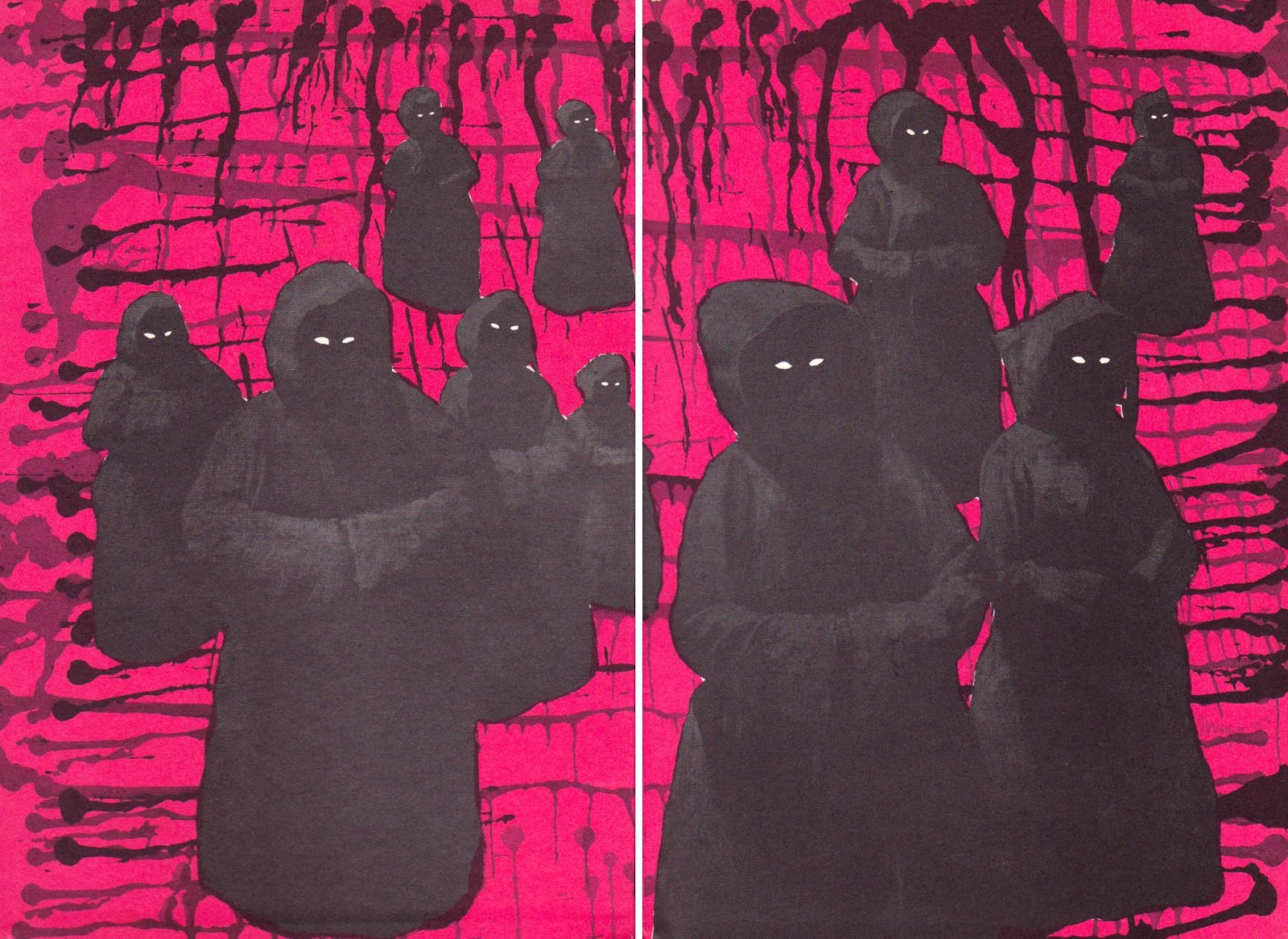 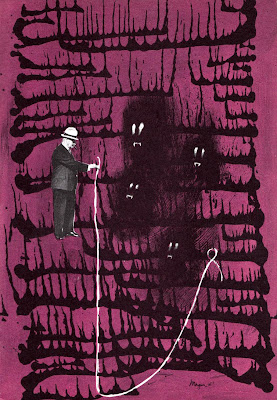 Extollager said:
Do you remember "The King of the Cats" as any good? It didn't get off to a start that interested me, and I'm sure I wouldn't have read it back in the day. There's one story in the book that made quite an impression... more about that soon.
Click to expand...

Well, "The King of the Cats" isn't a horror story by any stretch of the imagination, but rather a whimsical fantasy. For some reason the image of the catman playing the piano with his tail really stuck with me.

Joseph Payne Brennan's "Slime" was, I'm sure, for the youthful me the big hit of Monster Museum. An earthquake has deposited a big thing like a voracious black light-hating amoeba from the seabottom onto the land in some Gulf Coast state. It devours a cow, a drunkard, a girl's boyfriend, etc. until soldiers and townsmen dazzle it with bright lights and burn it to death with a flamethrower.

I retold the story to my hapless young sister. She has forgiven me, or perhaps a merciful oblivion has interposed itself between that moment and her subsequent life.

I'm reading a paperback edition without the illustrations, but I would guess the one below was for "Slime."

Will F. Jenkins's "Doomsday Deferred" is a hive-mind variation of the famous "Leiningen Versus the Ants" idea. The narrator figures out how to destroy the organism of which millions of ants are the "cells" before It can realize that it could control human beings. I don't remember having read it before, but then I have the impression that when I first encountered "Leiningen" it might have seemed familiar.... I think anthologies for young readers were rather more sophisticated then than some adults today might be comfortable with. For instance,

I knew I liked "Mr. Loveday's Little Outing" but it wasn't until I was older than I realized how subversive Waugh's humor is; much more subtle than a teen is likely to understand. And the essays by Pearson, Coates and Martin were chilling true crime accounts, as I recall. (It's been decades since I read this.) Also as I recall, Kahn edited other anthologies along this same line.

But this was the sort of reading that cultivated a life-long interest in sf/fantasy/horror/mystery in me and others of my generation.

Impressive contents, Randy! Maybe that's a book you'd like to use for some entries in this Browsing Around subforum? (hint hint)

Victoria Silverwolf said:
I have read Sloane's two novels, and found them to be fascinating mixtures of mystery, science fiction, and horror. Quite well written and ahead of their time for the Thirties. (The Edge of Running Water was made into the interesting Boris Karloff film The Devil Commands. The film doesn't capture the cosmic vastness of the book's final vision, but it's an offbeat little thriller.)
Click to expand...

I read them both last year. Loved The Edge of Running Water, though wasn't keen on the other one.

Richard Parker's "The Wheelbarrow Boy" was another dud in Monster Museum. A boy misbehaves so the teacher turns him into a wheelbarrow, but is unable to turn him back. Nor is the headmaster. The teacher takes the boy/wheelbarrow to the latter's home, apprehensive of being in big trouble with the parents. The farther threatens the boy/barrow with a belt and the boy changes back to boy form.

Most kids picking up a book like this would probably feel puzzled, cheated, or perhaps even belittled since they didn't "get" why this was in a book of monster stories -- was there something amiss with them that they didn't see why?

Extollager said:
Impressive contents, Randy! Maybe that's a book you'd like to use for some entries in this Browsing Around subforum? (hint hint)
Click to expand...

Hi, Extollager. I have a few of the stories in other books, so maybe I can revive my flagging memories.

As for Some Things ... I borrowed it from the school library roughly 4 decades ago and have never picked up a copy for myself. I have seen copies, though, so we'll see ...

Paul Ernst's "The Microscopic Giants" was published originally eighty years ago in Thrilling Wonder, and had been reprinted From Off This World and Science Fiction Terror Tales before being reprinted in Monster Museum, which, btw, apparently was really edited by Robert Arthur. I'd forgotten that I started a thread for Robert Arthur's anthologies a while ago, which is where these comments on Monster Museum should be appearing. Oh well. I'll continue them here, with a note at the Arthur thread.

Reading Around in Robert Arthur's Anthologies

Anyway, the Ernst is okay as an example of that old Thirties pulp sf. Deep-delving miners discover an offshoot of the human race that can move through solid rock, so dense they are. With a sort of tiny ray gun they kill and attempt to take as a specimen a companion of the narrator, who uses explosives to bury the 40,000-foot level diggings.
You must log in or register to reply here.
Share:
Facebook Twitter Reddit Pinterest Tumblr WhatsApp Email Link
Top