Scott Gimple answered a question about how Carol will feel about Daryl's reaction to her banishment:


"What Carol knows about how Daryl reacted is pretty limited because she wasn't there." That said, Carol's estrangement and eventual return "does have weight" and "will be felt throughout the season," Gimple adds. "It's part of their history. And they haven't seen each other since it's happened. So there will be a catching up to that fact.
http://tvline.com/2014/09/02/the-vampire-diaries-season-6-caroline-stefan-love-story-spoilers/ ctg said:
I won't put them here cos people will be complaining. And I got enough of that sh*t.
Click to expand...

Who would be complaining, and for what reason?

For those who are interested (which included me, as I wasn't aware they existed) it appears they can be found here:

Culhwch said:
Who would be complaining, and for what reason?
Click to expand...

Ask Brian. I have asked who were and I didn't get clear, definite answer and then everything went seriously bad.

Speculation has arisen over whether TV Maggie would join her comics-counterpart in being pregnant this season. When asked about it, actress Lauren Cohan said: "There are a lot of people who read the comics and you can appreciate that the show does divert from the comics. There is a lot in store for all of us. I think this season features more monumental change for all of us on this stage." Earlier reports that reinforced the rumour that Maggie would give birth in the upcoming season were that one of the locations is a hospital and that the show needed an old sonogram machine.
http://www.christiantoday.com/artic....spoilers.maggie.mother.next.season/40184.htm 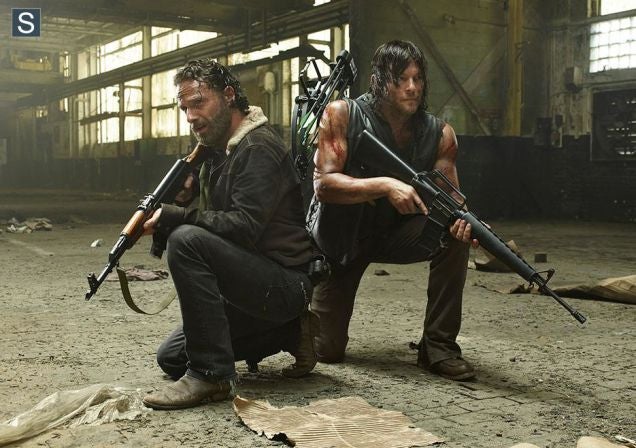 Norman Reedus talked to EW about where Daryl is heading in season 5.

Wow, he's trapped in a box, so I think he's probably pretty feral at the moment. He's probably a little scared which makes him a little more feral. ... He's changed a lot of ways since season 1. In season 1 he had such a chip on his shoulder and didn't think people trusted him and he didn't trust other people. Everything just kind of came out of the side of his head. This season he's very much in your face and his shoulders are square to you and he means what he says. He'll look you in the face. People rely on him now and I think before he thought people would cross the street if he was walking toward you. Now he's an integral part of the group. People trust him and I think he's accepted that trust.
Click to expand...

Here's a description of season 5:

Season Four of The Walking Dead ended with Rick and the group outgunned, outnumbered, and trapped in a train car awaiting a grim fate. Season Five picks up shortly thereafter. What follows is a story that weaves the true motives of the people of Terminus with the hopeful prospect of a cure in Washington, D.C., the fate of the group's lost comrades, as well as new locales, new conflicts, and new obstacles in keeping the group together and staying alive.

Stories will break apart and intersect. The characters will find love and hate. Peace and conflict. Contentment and terror. And, in the quest to find a permanent, safe place to call home, one question will haunt them…After all they've seen, all they've done, all they've sacrificed, lost, and held on to no matter what the cost…Who do they become?

I should remind comic book followers to read Hunters line in the issues #61 - #69 before TWD returns in the small screen.

Seems that we've already diverged from the comic's Hunters storyline a fair bit, but I'm intrigued to how things get back on track (could not resist that one given how much train track action we've had last season!)

I bet there's going to be more train tracks coming as they ventured north towards the Washington DC. They could use one of those trains that we saw at the end of the previous season and just carry everything they need into the heart of the monstrosity that they once knew as states capital.

That would be a good way to speed their transit north! Train travel was used to good effect in the Telltale game too...

But I actually hope that they take their time heading to DC (if that is where they're heading) as the open road has lots of opportunity for great action along the way... Seeing the characters in the 2nd half of last season, separated, low on resources and even lower on safe cover, made for a really compelling arc.

Three of us gone? Does she mean Judith, Carol and Tyreese or someone else? Unfortunately no train.

Steven Yuen said that Glenn'll still be growing up this season:

We first met him as the plucky kid who's kind of down to do anything, but wasn't really watching out for himself. We found him take value in himself. We found him grow into himself. I think this apocalypse had made him into someone that is reaching his true potential, whereas society might mot have let him get there. He's really getting to know what he's made of. He's proved his worth quite a bit. At this point we also see him very hardened. Even though he does seek humanity, he does seek hopefulness, there is a semblance of understanding the world that he lives in, which is very brutal and I think it's this struggle that he kind of wars with in his own mind which is, which way do you go? And I think he's still growing in that respect. But he's definitely probably the man he never dreamed he could be at this point

... He set out on a quest that was pretty much against all odds and he came out on top. He found his wife. And I think for him that's something that's solidified a sense of humanity in him, a sense of hopefulness in him that continues to persevere even though he continues to face some many terrible things.
Click to expand...

Just to correct some rather bold assertions made within this thread:

There would be no problem with either linking to or discussing those youtube mini episodes within this forum. You are welcome to start a new thread for them. There is a problem only with spoiling by posting within an episode thread (i.e. Last Episode: 7.13) with information from later episodes or from the graphic novels and 'spoiling' the enjoyment of that episode. If you wish to talk about the graphic novels start new threads for them in the graphic novels forum and if you wish to compare both, do so here but mark that thread with a spoiler warning just as has been done in this thread. Similarly, if a thread was titled 'Season One' then don't post about Season Two within it. If this policy is still not clear after 14 years then please message me to explain it to you in more detail.

Secondly, forums are not given to any member or the possession of any single member or members. The moderators have a difficult job to do, made more difficult if members refuse to follow their instructions. The moderation in this forum has had a fairly light touch in the past and spoilers were allowed to pass because they were not noticed. They would never have been allowed to pass if they had been seen. That will no longer be the case. If this appears to be a new change of policy it isn't. In addition, any abuse or rudeness to the moderators is not going to be tolerated, no matter how long that member has been here.

We all appreciate your hard work Dave, and the other admins.. I have been in your shoes

The Walking Dead’s already huge horde of actors only keeps getting bigger as they announce a new cast member for Season 5.

Tyler James Williams (Everybody Hates Chris) has been cast in the show but it is so far unclear whether he will join as a guest star, a recurring character or a regular.

Details about the 21-year-old’s role haven’t yet been confirmed. All we know is he’s playing someone called Noah (which, if he does make more than one appearance, will probably ensure a nice, ahem, character arc).

Williams won’t be the only new face in Season 5. He’ll be joining the show as a newbie along with Seth Gilliam (The Wire), who was confirmed to be playing a new series regular called Michael Todd last May.

It's good to keep adding to the cast, especially as we have high expectations that not all of them will get out of Terminus, not in one piece at least!

I wonder if they're reacting to the mocking they got in the early seasons about only having one black man on the cast, and killing one off if another showed up! Affirmative action for the zombie apocalypse

In any case I'm glad that Tyreese has lasted longer than he did in the comic (introduced later too, mind) and that we have a great cast in terms of diversity which reflects the randomness of surviving this long. Mostly I'm happy that so many of the cast are undercover Brits. Their US accents sound OK to me but are probably more distracting to those who can spot the errors they may make!

Emily Kinney talked a little bit about Beth and Daryl's connection in the new season:

Michael Cudlitz says we'll get a bit more from the history of Abraham this season:

We're going to be definitely examining his past and certain things are taken directly from the comics, as Scott has said, and certain things are paying homage to the comics. I think people who are fans of the comics and people who know nothing about it will be equally satisfied with the reveal of Abraham's past and what is driving him. We're definitely going into all of the characters, what drives them this year. It's really, really ambitious.
Click to expand...

He also talked about the relationship between Rick and Abraham:

You did see a little bit in the trailer. Obviously they weren't agreeing in that moment to say the least. Remember, Abraham is a sergeant. He's a non-commissioned officer. He's definitely mission-oriented, but it's typically dealing with a smaller mission. He's not necessarily the guy who holds the keys to the big plan. There may or may not be tension with someone who wants to be the colonel or general because that's not what he's accustomed to doing. You give him a plan and he will absolutely execute it.

​
That's not to say that he can't be the colonel or the general someday. It's just saying that right now, he's not. It doesn't even come down to that. It comes down to making sure that this mission gets executed and making sure that Eugene gets to Washington. If someone else has a better plan that's viable that will work, or a better way to do it, or to approach it — he's not closed off to that. It's not "We're going to D.C. my way." It's "We're going to D.C., even though it might have to turn into my way at some point if tensions rise and people don't cooperate."
Click to expand...