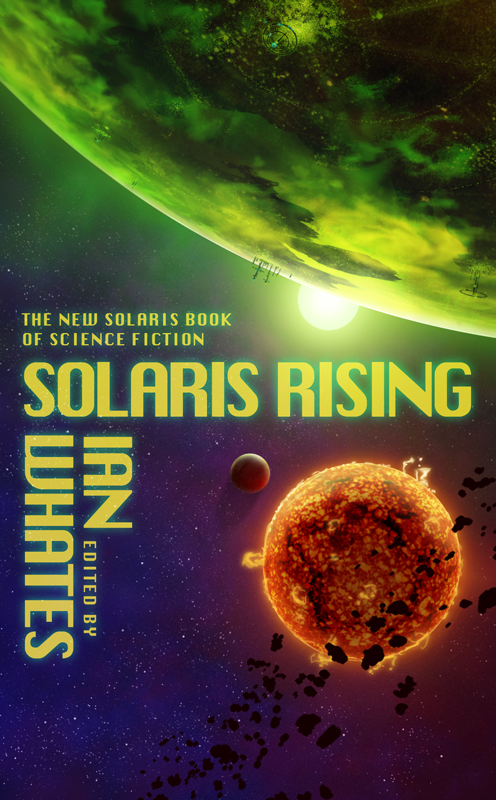 Subtitled “The New Solaris Book of Science Fiction”, Solaris Rising is precisely that – a reboot of the George Mann edited The Solaris Book of New Science Fiction under a new editor, and an anthology of nineteen stories by well-known contemporary science fiction writers. And like any anthology, especially one without a theme, the book stands or falls on the stories contained therein. Whates clearly has a light hand when it comes to editing, and the stories in Solaris Rising cover a wide range of science-fictional modes and approaches.

Alastair Reynolds, for example, does what Alastair Reynolds does best, and in ‘For the Ages’ he has vast distances, deep time… and a story very much focused on the personal level. Likewise, Ian Watson remains true to form with an energetic tale of marooned astronauts on Mars being returned to Earth by a flying saucer and ending up living in a Spanish Wild West tourist attraction. Stephen Baxter’s ‘Rock Day’ suffers from being half set-up and half explanation, though it is affecting. Paul di Filippo provides one of the highlights in ‘Sweet Spots’, with a story of a high school student with a strange talent, though its ending pushes the central conceit a little too far. Ian McDonald’s ‘A Smart Well-Mannered Uprising of the Dead’ impresses with its local colour, though you have to wonder if the satire would have had more bite if it had been set in the West rather than an African nation – though, to be fair, it’s predicated on local culture, so perhaps it wouldn’t have worked otherwise. Dave Hutchinson tells Dr Manhattan’s story in ‘The Incredible Exploding Man’ and, while it’s done well, you have to wonder why. Adam Roberts’ ‘Shall I Tell You The Problem With Time Travel?’ is another of the anthology’s best, turning on a neat conceit, and though a not entirely serious treatment, it makes some serious points.

Ken MacLeod’s alternate history, ‘The Best Science Fiction of the Year Three’ pulls a rabbit out of a hat in the last paragraph, but it’s more the world it describes than the core idea that entices. Stephen Palmer’s ‘Eluna’ reads like an excerpt from a longer piece and suffers as a result, but the world it describes is interesting and worth a longer visit. Jack skillingstead’s ‘Steel Lake’ is among the least science-fictional in Solaris Rising but its tale of the side-effects of an anti-sleep drug are done well. Steve Rasnic Tem’s ‘At Play in the Fields’, set in a future Earth in which aliens hunt through the ruins of human cities I thought less successful. And Mike Resnick and Laurie Tom’s story of the Chinese-American captain of an interstellar mission trying to hang onto her culture, ‘Mooncakes’, is trite and old-fashioned.

Richard Salter’s time-slip serial killer in Brighton is effective, although as a mystery it’s not entirely satisfactory – but then the sf/crime story is an odd mix that rarely gels. After all, sf needs things to be explained, but crime prefers to hide things in order to delay the resolution of the central mystery. Lavie Tidhar’s ‘The Lives and Deaths of Che Guevara’ is the Boys from Brazil meets the boy from Argentina, and a clever piece about rebellions. Tricia Sullivan’s ‘The One That Got Away’ is opaque and set in a very strange world. I’m not sure how successful it is. Pat Cadigan’s ‘You Never Know’, however, is very much set in the world we know, and leads up to an affecting ending.

Jaine Fenn’s ‘Dreaming Towers, Silent Mansions’, another of the stronger stories, opens traditionally enough with a team exploring an alien city, only to turn strange and unexpected towards the end. Equally traditional is Keith Brooke and Eric Brown’s ‘ Eternity’s Children’, in which a guilt-ridden protagonist finds redemption in the forgiveness of others – in this case, the short-lived inhabitants of the planet which produces the longevity drug that makes the rest of the universe near-immortal. Finally, Peter F Hamilton’s ‘The Return of the Mutant Worms’ closes off the anthology in amusing fashion, with a tongue-in-cheek look at the author’s own career – the reference to “the best known name on the slush pile” was one applied to Hamilton himself by the editors of Interzone twenty years ago. It provides a perfect end to the book.

If there’s anything that characterises Solaris Rising it’s that most of the contributors have done what they do well. Few seemed to have moved far from their comfort zones which, I suppose, a themed anthology might have encouraged them to do. This is not a criticism, just an observation – after all, the authors in Solaris Rising are good at what they do, and they’re known for being good at what they do. It would be foolish to expect them to do something different. Despite this, the contents of Solaris Rising are varied – in mode and topic, and, it must be admitted, in quality and enjoyableness. But that is the nature of the beast.

There are those who think the short story is dying out, but the current plethora of genre anthologies and magazines put the lie to that. However, most of those anthologies are published by small presses, which means ones such as Solaris Rising are important in getting the word about short fiction’s health out there. Solaris Rising is a strong debut to what I hope will become a series.
You must log in or register to reply here.
Share:
Facebook Twitter Reddit Pinterest Tumblr WhatsApp Email Link
Top