I think I've got an addition, someone help me.

Ever wanted to be a Buddhist monk and run your own temple, competitively? Well, who hasn't. Now's your chance.

I recently brought my first board game in forever when I joined in on the Kickstarter for In The Name Of Odin. Pretty excited about it coming.

It's very rare that I buy more than one expansion for a given board game but I love "Race for the Galaxy" so much that I picked up "Xeno Invasion".

Lots of new cards but also contains an optional 'Invasion' module in which the galaxy is being overrun by a hostile alien race and players are forced to do their bit to defend and fight back against the common menace. Adds an almost semi-cooperative element to this otherwise cut-throat competitive game.

Is it like the pirate ship in Seafarers of Catan, where you can sometimes use noncooperation to your advantage, or does every player suffer the same negative consequences?

All those beautiful cards and pieces: looks good!

Carolyn Hill said:
Is it like the pirate ship in Seafarers of Catan, where you can sometimes use noncooperation to your advantage, or does every player suffer the same negative consequences?
Click to expand...

It's nothing like the pirate ship in Catan where one player gets to move it and put it somewhere inconvenient to others. At the end of each round (after the xeno invasion has begun, each player must defend against it or face one of their worlds becoming damaged. The vaguely cooperative element comes from the fact that if the players combined military strength outweighs the xeno strength, they are considered repulsed and the game ends.

One might think that playing with this expansion forces one to take a military strategy but that is not the case; players pursuing instead a strong economy can muster temporary defences by sacrificing goods/cards and may elected to contribute to the war effort with surplus goods.

Getting back into board games now the offspring are old enough to join in.

Used to play a lot of Advanced Third Reich and once tried Rising Sun. Nowadays it's High Frontier or Arkham Asylum for the adults, or Forbidden Island or the newer Forbidden Desert with the kids as they're both cooperative. All highly recommended.

I just got "Citadels" which is a surprising hit with the kids (surprising because it is quite cut-throat).

A couple of games I took on a recent holiday that went down well with my family.

My son was not so keen but my wife and daughter really enjoyed For Sale in which you bid against each other to assemble the best property portfolio that you then sell off. Whoever has the most cash at the end is the winner. 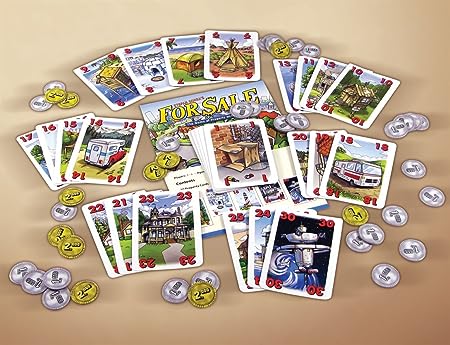 Quite a bit of fun trying to escape your astronauts and watching your opponents getting eaten by big ugly alien monsters!

Civilization in a board game and it plays in about two hours: Historia

It plays up to 6 players but you can fill out the number of players with "civ-bots", artificial players that make tough opponents!

Hoo boy. I did not realise there was a boardgame thread here. I am a massive board game nerd.

I'm by far the one that enjoys them the most in my group of friends, though they all enjoy joining in when I set up a game night.
One of my friends refuses to play Game of Thrones (2nd ed), since he's never won it in the 70-odd times we played it, and some are hesitant to join in on a game of Twilight Imperium 3. Of course, TI3 is not for everyone.

However, I've been... collecting people to play with, so I now have enough people to split it into two groups. One group for 'regular boardgames' and one for the people that are mad enough to get into a 12-hour long game. Admittedly, the people in the latter group (me included) have the stamina to play two games of TI3 back to back. It's amazing. Such a great experience, every time.

Other games I play frequently include:
7 Wonders (with all the expansions)
Star Realms
Runewars
Spectre Ops
Descent 2
BattleLore 2

I've got a bunch more games, but those are probably the ones we play most.

12-hour long game...wow, it's been a long time since I've had the time (or the stamina) for that. These days I prefer a game that comes in under 2 hours.

I often find I can't find opportunities to play with others as much as I would like so I have resorted to the odd solitaire game from time to time. "Friday" is a challenging solitaire deck building game that I've enjoyed recently:

Try to establish and grow your ancient Greek city state against the backdrop of the looming threat of disasters such as an earthquake or flood.

Huh, interesting. To keep it to a Greek theme:

Bought Cyclades two days ago. We played it three times since then. This game is all about building an empire on the Greek islands and somehow scheming your way into owning two metropolises. I liked it quite a bit, but this game got more love from my friends. They all like it more than Kemet, and they asked me to play it, rather than me asking them to play it. Cyclades looks very interesting, I've had my eye on it for a while (my eye is on too many games). Looks like a lot of fun.

The figurines in the photo of Cyclades look fun. I enjoy games with detailed figures and playing pieces.
B

I've just started an ongoing game on Pandemic Legacy with some friends -- really, really good, especially when completely new rules are unlocked, and things like that. You tear up cards, but stickers on the board, modify cards, all of that...

I haven't played either of those for years. I spent a lot of time with Stratego when younger, but then got diverted into the Avalon Hill games while I was in the Navy...
W

Board games are probably my second love after books, I probably own a few hundred now though I daren't get them all together as they'll reach critical mass and my wife will explode.

Play pretty much anything but I'm also very keen on historical wargames, and I play a lot of solo games when I'm not getting together with the local gamers.

Currently painting up Shadows Of Brimstone which is a fantastic RPG kind of boardgame with a weird west setting. Can run campaigns with character advancement and stuff, really good fun.