Reading Around in Groff Conklin's Anthologies

PS The Budrys story just mentioned is from Conklin's 13 great Stories of Science-Fiction, which may be seen briefly in the "secret bookstore" video to which I provided a link earlier today. 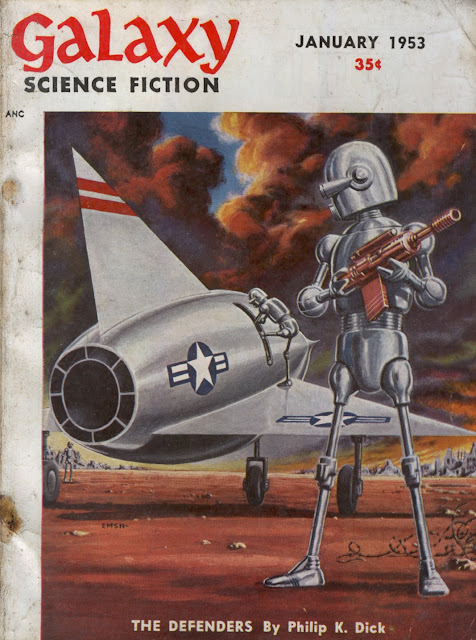 This early issue of Galaxy included James Causey's"Teething Ring," which was not only reprinted in Conklin's Fifty Short Science Fiction Tales but in The Second Galaxy Reader. What a sourpuss I must be not to be amused by this inoffensive, humorous yarn about an irresponsible alien visitor giving an advanced device to an 18-month-old baby. 2/5 This was #31 in my Conklin series. Author Causey published a few stories in 1953 and 1954 before, if I can go by Contento, disappearing from the field.

As I've said before -- this thread wasn't intended to be a blog of Extollager's Conklin readings and nothing more -- so it would be great to see others' Conklin comments. He was one of the most visible sf anthologists for 20 years or so; his books must have been gateway books for many readers getting to know sf. In one of Damon Knight's anthologies I just read a Theodore Sturgeon story, "The Other Celia," that was new to me (originally published in the Galaxy issue above, where it didn't make the cover copy). So far as I can tell from Contento's index, the story has been anthologized just a few times, but never by Conklin. It seems like something he might have liked to use, so I'm wondering if Conklin sometimes would have liked to reprint certain stories but couldn't afford the fees. I'm wondering, in other words, if at least at times Conklin had a pretty limited budget from his publishers, and so he deserves credit for trying to do a good job with limited resources. As my entries have shown, I'm finding that quite a few of the stories he reprinted were not -- in my experience -- all that good. Evidently the overall quality of his books was sufficiently high that he didn't develop a reputation as an anthologist of mediocre stories. But then that raises another question: what was the profile of Conklin's reputation among fans, contemporary reviewers, etc.? I'm sure that his early, thick anthologies were fondly remembered and at least some of them were often reprinted by the SF Book Club (so that if you want inexpensive used copies you may be able to pick up copies for a few dollars, with many hours of reading). But after the first years he was a paperback anthologist. What were reviews of those books like? I wonder if they were often not reviewed in much detail....

My first story for September is Ralph Williams's "The Head Hunters" from The Omnibus of Science Fiction, reprinted from this issue of Astounding --

This one (#32 in my series) gets 3/5. I thought about 2/5 but went with the higher score because the Alaskan setting seemed reasonably convincing, for one thing. It's a hunters-and-the-hunted story with a telepathic alien and three human beings who are differentiated adequately and economically by the author. The above illustration was for a different Williams story, "Cat and Mouse" in the June 1959 issue, but it could have fit this one. I'm not sure "Cat and Mouse" was ever reprinted in book form, even though it was nominated for a Hugo.
http://sciencefictionbiology.com/directory/cat-and-mouse-by-ralph-williams/
It is available from Project Gutenberg. It got the cover for its issue: 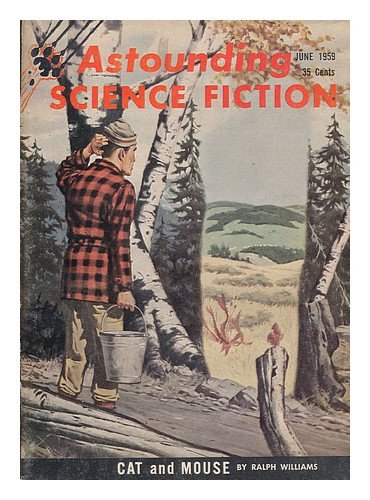 That must be one of the least science-fictiony covers ever sported by any sf mag, as far as a cursory glance is concerned.

Number 33 in this series and my second for this month is "Invasion from Mars" by Howard Koch, as reprinted in Conklin's Invaders of Earth anthology. 3/5 This is the script for Orson Welles's Mercury Theatre of the Air broadcast based on H. G. Wells's The War of the Worlds in 1938, cleverly updated and relocated to the American East Coast.

It reads reasonably well, but is, of course, designed to be listened to in a version with several voices and sound effects. The Wells original novel is one of the items of evidence that I offer in support of the claim -- which I stand by -- that the Golden Age for modern fantasy and science fiction was the 25-year period 1887-1912.

Someone here seems to have combined art of John Atkinson Grimshaw with Wells's tripods: 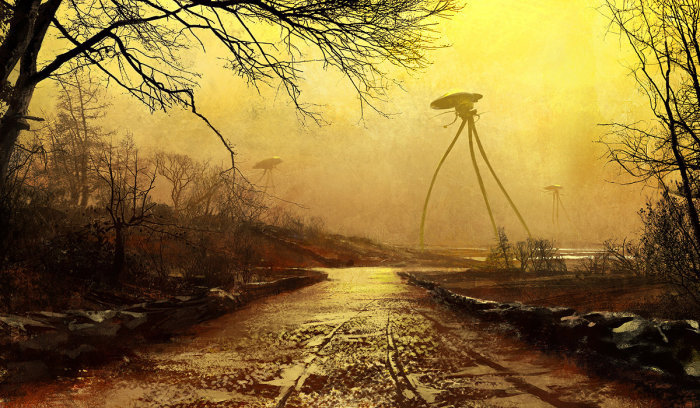 Jack Vance's "Winner Lose All" from the Omnibus of Science Fiction is #34 in this series and my first for October. I wasn't much taken with it but I suppose 3/5. As the title suggests, it's an exercise in irony, and in the construction of a couple of bizarre alien life forms. It originally appeared in the Dec. 1951 issue of Galaxy with a typical "clever" Galaxy -type cover featuring Santa Claus and aliens. However, in addition to a passable Vance story, it contained the exceptional "A Pail of Air" by Fritz Leiber. My 35th entry in this series is Theodore Sturgeon's "The Education of Drusilla Strange," reprinted in Conklin's Operation Future from the March 1954 issue of Galaxy. Banished, as convicted of murder, to wretched earth, an alien woman learns humility and that life with an earthman might be a good fate after all. 3/5, I suppose, but not all that good.

For November, I have reread my two 5/5 stories in this series -- "Vintage Season" and "The Colour Out of Space." The Conklin text of the Lovecraft story retains HPL's "colour" in the tale itself but titles the story "The Color Out of Space." In the third paragraph it also has a remarkable typo, "amidst the wheels [for "weeds"] of a returning wilderness."

Number 38 in this series, and my first for December, is "c/o Mr. Makepeace" by Peter Phillips, reprinted in Conklin's Operation Future from its prior appearance in F&SF for Feb. 1954.

It was reprinted in the Sixties in Damon Knight's The Dark Side:

On the basis of one late-night reading when I was tired, I'd give 2/5 for what I take to be a story of a "schizophrenic" or split-personality fellow who effects psi phenomena without realizing that he himself causes them.

Number 39 in this series and my second entry for December is "The Chrysalis" by P. Schuyler Miller, reprinted from the April 1936 Astounding.

A "dendrochronologist -- a tree-ring expert" and his associates find what appears to be a hard, perfectly-preserved, perfectly beautiful woman in ancient layers of soil. Studying her form in their lab, they entertain various guesses about how she came to be buried and how she was preserved. The poor guys, they didn't have the benefit of the story's title, which has been staring readers in the face from the beginning. Sure enough, the lady splits in two and a monster -- sporting literal bug eyes -- emerges, kills four men, and vanishes. Will it soon die or will it perhaps "multiply and return to scourge the Earth"? "Perhaps -- but shall we ever know?" 1/5

Raymond Z. Gallun's "Operation Pumice" is dated indeed, being about the first man to orbit the moon, but I'm inclined to give it (#40 in this series) 3/5. Conklin reprinted this story of the astronaut's sympathy for a geeky kid who hitch-hiked across the US just to see the rocket, in Possible Worlds of Science Fiction. The multiple-booster rocket design sounded pretty realistic, by the way. As you read the story, you're probably feeling a little suspense -- is this going to be an optimistic version of the "Cold Equations" idea -- the kid's going to stow away and that's awkward, but he and the astronaut make it back to earth safely? But there's no stowaway theme here.

Wollheim reprinted it in Men on the Moon (1958 and opportunistically 1969): 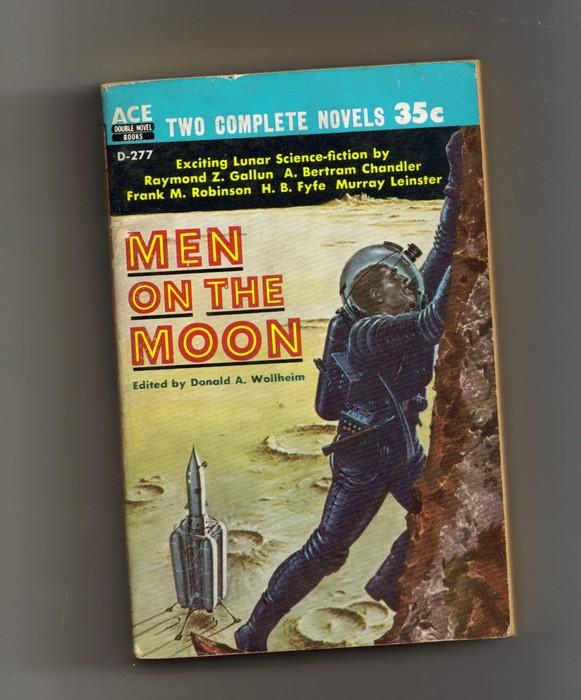 Fredric Brown's "Earthmen Bearing Gifts" appeared in 12 Great Classics of Science Fiction. Although it's very short, you get first the telepathic Martian perspective of the imminent arrival of an unmanned Terran probe, then the perspective of Earthmen about the planned detonation of the probe for the sake of spectrographic analysis of Mars, which is a lifeless planet as everyone knows. I might use it sometime when teaching the concept of irony of situation. 2/5

The story first appeared in Galaxy for June 1960.

Btw, if "Earthmen Bearing Gifts" had been in that Conklin anthology of 50 sf short stories, I probably would have awarded it 3/5 or even 4/5 by comparison with the stories read there so far.

Lion [sic] Miller's very short "The Available Data on the Worp Reaction," reprinted in 13 Great Stories of Science-Fiction* [thus on cover and spine, but hyphen missing on title page] is #42 in this series of Conklin-selected stories. I rate it 1/5, not worth reading, although it is not "bad." "Data" is a tongue-in-cheek idiot savant story that first appeared in F&SF for Sept. 1953. The protagonist assembles a flying device from junkyard materials.

This might be a good time to pause and offer a few observations and speculations about Conklin's anthologies. What I say should be taken with a grain of salt. I have read only a fraction of the total number of stories that Conklin reprinted. I know relatively little of the magazines from which he drew his stories.

1.Conklin's books were an important element in the public face of sf during the times in which they were published. Some of them ended up in public libraries and school libraries. In this his books are like those of Ray Bradbury. Conklin's collections were gateway books; innumerable must have been the future fans of sf whose earliest reading in the field included stories in Conklin anthologies. 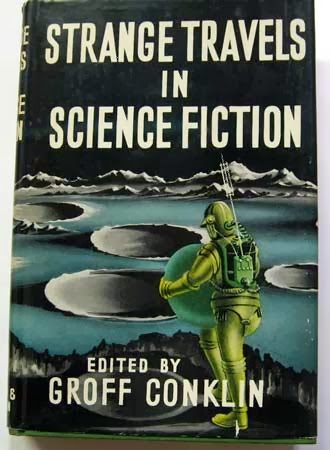 2.The cover art and the stories selected helped to promote awareness that sf need not be focused on yarns about tough-guy spacemen protecting women in lingerie who were being menaced by extraterrestrials, space pirates, exploding planets, etc.

-- the art on his sf books was generally reasonably tasteful and not utterly juvenile-looking.

3.Certainly Conklin reprinted a number of the acknowledged sf classics. Browsing his anthologies this year, though, I have been struck by the presence of numerous stories that didn't do much for me at least.

4.His choices seem to reflect developments in the sf field. Quite early on in its history, unlike the situation with some genre fiction, sf was reacting against its own history, however recent. Sf writers and editors indulged in "clever" irony and satire after having indulged in escapist adventure. I suppose many individual writers, as youngsters, pen adventure stories lacking in plausibility, with stock situations, etc. Before long they are writing wry, sophomoric stuff and maybe think no end of their cleverness. This may be a more or less inevitable "phase" for some writers. It seems something of the sort happened in sf. Many of these stories that kid around with sf tropes are not, now at least, very enjoyable. Many of them seem to be by authors who are hardly remembered now.

More Conklin anthology covers that I haven't shown before here: These are images I found, not books in my own collection. Thanks for those images.

I must have read some of these from libraries, if nothing else, but I can't recall any one in specific with the exception of 50 Short Science Fiction Tales, which sticks in my mind because I enjoy flash fiction.

that catches much of the significance that the Conklin name used to have.

says that "Conklin had an exceptional public library status as a must-order," but I think that remark, if true, refers mostly to his hardcover sf anthologies -- although one would see some of the paperback ones in school libraries and classrooms, where the mass market paperback form itself was thought to be attractive to youngsters -- and I think that was often true, back in days that I remember.
Last edited: Dec 21, 2013
You must log in or register to reply here.
Share:
Facebook Twitter Reddit Pinterest Tumblr WhatsApp Email Share Link