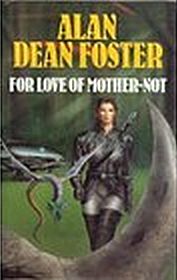 Just finished For Love of Mother-not, the prelude to the Pip and Flinx/Commonwealth books by Alan Dean Foster which was written in the early 80s. Foster's first novel, The Tar-Aiym Krang, was written in 1972, and is very much a hard SF space opera type romp. He later expanded the universe it is set in by adding more books in a series, and then I think he decided to write a kind of prequel, a book to explain how Flinx, and his mini dragon, came about.

For those not familiar with the series Flinx is a young lad with a Talent. He can perceive the emotions of those around him and detect someone's presence or change of mood, and he is accompanied by Pip, a kind of flying snake which shares a similar talent in as much as it can detect when Flink is angry at someone or in trouble. The story is set on one planet, Moth, but the other books are much more set in space, with various alien cultures- rather in the vein of Larry Niven's Ringworld.