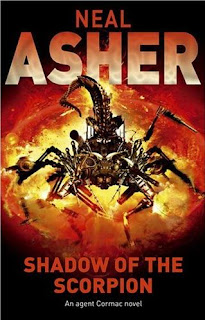 I've been having fun trying to convert a pdf sent to me by Macmillan into a jpg so I could put a picture of this cover up here. Nice free program downloaded to do it, only for some unfathomable reason it will convert the whole dust jacket except for the title on the front and spine. Another program accessed online (sends the picture to you by email) just converted half the cover, the back half, which is no use at all. I've ended up just copying this from amazon. The hardcover of Shadow of the Scorpion should be published on April 3rd.

Raised to adulthood during the end of the war between the human Polity and the vicious arthropoid race, the Prador, Ian Cormac is haunted by childhood memories of a sinister scorpion-shaped war drone and the burden of losses he doesn't remember. In the years following the war, he signs up with Earth Central Security, and is sent out to help either restore or simply maintain order on worlds devastated by Prador bombardment. There he discovers that though the old enemy remains as murderous as ever, it is not anywhere near as perfidious or dangerous as some of his fellow humans, some of them closer to him than he would like. Amidst the ruins left by wartime genocides, he discovers in himself a cold capacity for violence, learns some horrible truths about his own past and, set upon a course of vengeance, tries merely to stay alive.

Haha, I found the best way to convert a pdf image into a jpg is to press print screen on your keyboard and save it in an image editing tool like photoshop or ms paint. Glad to see I an Cormac makes a return. Is this a follow on from the first Cormac series? One other question, can I read the Voyage of the Sable Keech without having to read any of the other novels. I have read Gridlinked (very good book!) and am familiar with the universe you have setup up. Maybe I should just stick to the published order. Cheers Neal and keep 'em coming. By the way I think I have asked this in another thread but when are you going to come to South Africa? It would be cool to get some books signed and to meet you in person

It's best to read The Skinner first since Voyage is very definitely a sequel (and there'll be one more next September called Orbus). Therefore:

Shadow of the Scorpion is set some time before the above Cormac series alternating between when he was a child and when he was an army grunt.

I've just stuck a post up about it on my blog -- along with the cover ... in fact I think I'll do it here too. 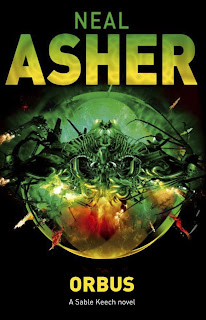 Damn but I'm losing my marbles. I got sent this cover quite a while ago and completely forgot about it. Here then is the cover for Orbus, available for pre-order on amazon, along with one of the blurbs. Both are likely subject to change...

Now in charge of an cargo spaceship, the Old Captain Orbus, flees a violent and sadistic past, but he doesn’t know that the lethal war drone, Sniper, is a stowaway, and that past is rapidly catching up with him. His old enemy, the Prador Vrell, mutated by the Spatterjay virus into something powerful and dangerous, has seized control of a Prador dreadnought, slaughting its entire crew, and now seeks to exact vengeance on those who tried to have him killed.

Their courses inexorably converge in the Graveyard, the border realm lying between the Polity and the Prador Kingdom, a place filled with the ruins left by past genocides and interplanetary war. Secure in that same place the Golgoloth, a monster to a race of monsters, is recruited by the terrifying King of the Prador into the long cold war between his kind and the humans. It is imperative that Vrell be hunted down and killed, for what he knows and what he might become.

Meanwhile, something that has annihilated civilizations is stirring from a slumber of five million years, and the cold war is heating up, fast.

Excellent. Sniper and the Prador, look forward to it.
W

OK, I feel like a total idiot. I should have known that.

Thanks for the info.

Wyrmbyte, I like to vary the length of my titles sometimes.