I still want to see the conclusion to Space 1999 - I hate it when a series is abandoned in the middle of a story.

I blame it on those Sci-fi snobs in the BBC, or whoever it was that cancelled the show!
B

There was an attempt to bring back UFO in 1996, but it failed as well. The new craft that were planned looked really good and it's a shame it didn't happen.

Here's a link to info about the plan:

Thanks for that Techno & it looks good, don't know why it didn't happen

about the closest thing I've seen in regards to a conculsion to the show, other than the large amount of fanfiction is an pbem game set 100 years after the initial breakaway.

Actually, now that I think of it, it's more like the Next Generation. But it's fun.
B

Thanks for that Gem

September's SFX magazine announced the sad death of the 'Space 1999' actor Tony Anholt, who played Tony Verdeschi in the second series. He died of a brain tumour aged 61.
B

That is indeed sad news 2 hear of his death

On the Edge of Sanity

Actually, I liked the show, but it didn't get weird in the later eps. Talking plants? OMG!!

I really liked th Eagles. It looked like something that might actually work, in space, but not in atmosphere.

There was talk of a feature film made in the '90s, but it never came to fruition.
I'm not sure if they could 're-imagine' the series like they did with BSG, and make it work. But I'd like to see them try.

I don't think I'd like to see a remake - I prefer it how it was.

I didn't mind this actually, maybe my memory is fading. There were a few crummy episodes but overall I quite enjoyed it.
There was also the fact that an Australian was in it, made things a little more interesting. Nick Tate, I always looked forward to seing how much of a part he got each week, sometimes it was just the one word.
It did look terribly sterile and the outfits were all to much alike, but obviously that was intentional.
I wouldn't like to see it redone, it would be like doing Blakes 7 again. Some things are best left alone. If someone were to give me the DVD I would watch them again but I shan't be rushing out to buy them, unlike Blakes 7 which I couldn't wait for it to come out on DVD, I was waiting whilst the lady unpacked them, I think she thought I was a little crazy!!!!

ETDC said:
I don't think I'd like to see a remake - I prefer it how it was.
Click to expand...

Absolutely. A remake would never capture that inexplicable combination of acting, stories and exclusive dependence on models. Let's leave well enough alone. In any case, for its time it was exceedingly progressive as far as gender roles and equality. In rewatchings, it holds up exceptionally well, especially series 1.


Dave said:
Space 1999
The first season of Space 1999 was pretty dull and sterile looking. The plots were too complicated and the dialogue was serious.
Click to expand...

Well, this is certainly one way of looking at it, and I probably would have agreed when I was 10. Now I find incredible depth in the dialogue and wonderful subtlety in the acting of Martin Landau, Barbara Bain and the late Barry Morse. You certainly cannot dismiss the calibre of the actors, and their performances so often characterized as 'wooden' can also be read as very 'grown-up', as opposed to the more over-the-top acting so typical of scifi shows.

The second series was much more colourful, full of action...
Click to expand...

...and silly. Don't forget that part. Still, it had its moments and Catherine Schell and Tony Anholt were very capable actors that made the most of the sometimes laughable scripts.

The Eagle spacecraft were probably the best part of the show IMHO.
Click to expand...


Technomage said:
I still want to see the conclusion to Space 1999 - I hate it when a series is abandoned in the middle of a story.
Click to expand...

Series one's last episode did provide closure of sorts with the reviving of Arkadia by the Alphans Luke and Anna. The final image of Koenig closing his hardcopy journal and resting his pen on the cover can be seen as a 'story done' motif.

harryfielder said:
I'm trying to see the repeats on ITV4......

I always enjoy catching your appearance in the series 2 episodes, Harry! (really... Harry is (? was) an actor who shows up in a handful or two of the stories!!)

I loved the series (esp seris 1). The models were fantastic and the lifespans of the Alphans aphid short.

One episode in particular that gave me the collywobbles (when I was a kid) was a ships graveyard, with some sort of monster in it that skeletonised its victims.

I loved the one where they went to war with the Hawk ships.

Also the encounter with a generation ship was pretty good.

Gee I was a nerdy kid.

andrew.v.spencer said:
One episode in particular that gave me the collywobbles (when I was a kid) was a ships graveyard, with some sort of monster in it that skeletonised its victims.
Click to expand...

I loved the one where they went to war with the Hawk ships.
Click to expand...

Also the encounter with a generation ship was pretty good.
Click to expand...

Gee I was a nerdy kid.
Click to expand...

Yep, suspension of disbelief was pretty much a given in watching this show. (But, can't we say the same for many of our favorites?) Quite a few fanfiction stories have attempted to provide explanations; some of the creativity and writing is quite good.

THE site for all things Space 1999 would have to be Martin Wiley's Catacombs. I can't link as my post count is too low, but if you have not yet come across this wonderful resource just google 'Space 1999 Catacombs'. It's the first hit.

I think many of us who love this old show would fall under the category or 'nerdy kids'. I certainly was, still am, and proud of it!

Though I liked this series & still watch the DVDs, there are a few aspects that I disliked. I thought that the moon being blown out of orbit was at least plausible, and the technology on the first episode was not so far fetched as that in STAR TREK, so I expected that further episodes would also be. Yet, they almost immediately began using far-fetched elements such as beings that could read minds, levitate objects, and other fantasy elements that really disappointed me, especially the character Maya. It just seemed much too far-fetched that she could change from humanoid to avian, or whatever, regardless of the difference in size. At least 'Nancy' of STAR TREK's MAN TRAP used illusions rather than actually morphing physically.

I intend to finish watching the series, though I dislike these elements.

Forget science. You won't find it in this show, but I loved the first season for its "dark castle in space" atmosphere. We had Edgar Allan Poe's "A Cask of Amontillado" in the episode "Earthbound"; the Lotus eaters of Homer's Odyssey in "The Guardian of Piri"; a vampire in "Force of Life"; Satan tempts the Alphans with immortality in Hell in "End of Eternity"; and yet another type of vampire "dazzling" its victims and then sucking the life out of them in "Dragon's Domain." "The Troubled Spirit" gets extra points for creepiness with that awesome score and reflexive fate. There were lots of other fascinating stories and a wealth of guest stars.

And then along came the second season. Fred Freiberger "punched it up" with more action for greater audience appeal. Apparently, some producers think TV audiences are all mouth-breathers. The show was so mutilated that not only was Koenig's office and the cathedral-like Main Mission scrapped, the commander's Renaissance man character was junked, too. Landau played an entirely different character in the second season in a show that merely used a lot of the same props, the way props and costumes from Forbidden Planet continued to surface in other productions for years to come. The only character to survive into the second season was Alan Carter, but then he was a stalwart man of action already. 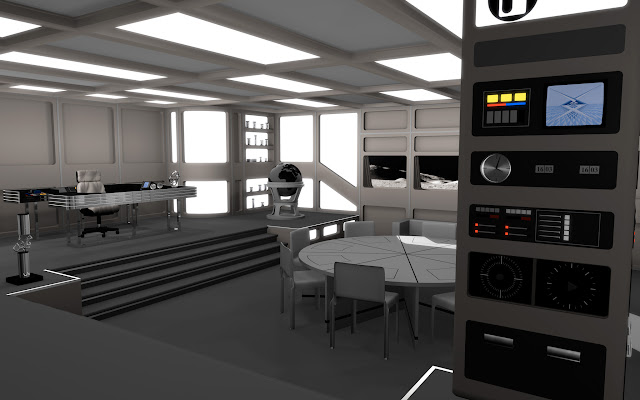 Catherine Schell played Maya, the resident alien, Spock-formula character who knew everything and could calculate faster than Alpha's central computer. She had the ability to metamorph into a menagerie of creatures, yet couldn't do a thing about those spit-ball eyebrows (which probably inspired all the bumpy foreheaded aliens in sci-fi for years to come).