A transporter malfunction turns Captain Kirk into two separate people: one good, the other bad.

This episode, the only written by Richard Matheson, is the cornerstone of the Kirk-Spock-McCoy relationship.

The first Vulcan Nerve Pinch -- an idea of Leonard Nimoy's.

A reworking of the 'Dr. Jekyll and Mr. Hyde' theme.

When the bridge Lt. reports to Kirk on the landing party he says no word on Mr. Solo. Who's Mr. Solo? is the Millennium Falcon stranded on the planet too?

The big question is: Why didn't they just send down a shuttlecraft to pick up the landing party? Wasn't that the way they used to do it in 'Enterprise' before transporters were safe!

A bad one, worthy of the third season though broadcast early in the first, from the cornball lit-from-below face of Bad Kirk in the opening scene on. The metaphysics of this one were muddled, too. And the Star Trek dog was ridiculous, a scene-stealer in a bad way. 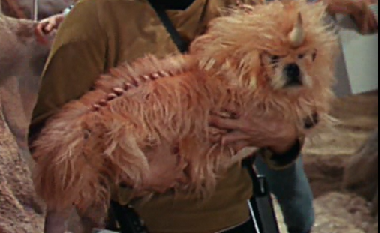 In short, a dog in every way.

Watched this one last night... wow.

I thought this was going to be the episode where the teleporter switches Kirks from alternate realities. Actually watching Kirk's dark side sexually assault Yeoman Rand was disturbing. She had to be written out of the show to keep Kirk's career on track.

McCoy actually was talking about the dog... "It's dead, Jim."

I wonder if Shatner enjoyed acting out this episode or if he hated it.

I could see the characters beginning to be fleshed out... well, Kirk, Spock, and McCoy.

Scotty's hair was slick/greasy. Scotty operated the teleporter to try and fix the dog... his hand movements showed the sliders moving down in the final move. The dog died. When it was time to fix Kirk, Scotty was no where to be seen... Spock did it... and his final movement of the sliders was up. So.... either the slider movements were incongruous or Scotty, the Chief Engineering Officer, was an idiot.

I forgot to mention Sulu.... because he's forgettable. Takei must've been thinking, "At least I can pay rent this month."

I kind of thought that this was a fun episode. I suspect that Shatner loved playing the two Kirks.