I remember watching this over and over again when it first came out because it was just so fascinating to me the way it was done. I couldn't imagine actors not really having anything to play against since the majority of the show is done in blue screen, but now it's an every day thing. I still have it on tape somewhere.

wow, this is really weird, we were just talking about tron on one of the farscape mailing lists (yeah thats a contradicyion I know but hey) Yeah I can only vaguely remeber this film becaus eI was only little wehn it came out, all I rememmber really is jeff bridges and the colours red and blue, I think I should get it out again and rewatch it
M

If memory serves it was one of the first to use blue screen like it did. I think I remember them saying that only about 10-15 minutes wasn't at the beginning and the end.

I also remember the computer and video games that came out. Trying to do the motorcycle thing was an exercise in futility for me.

Have you heard the rumours that there may be a second Tron being made?

Wonder who will be in it?

Has anyone seen the episode of The Simpsons where Homer ends up in a world just like Tron? Think its pretty good, especially for the Simpsons.

yeah I love that episode

I have never seen this, shocking I know! Is it worth watching it now - the special effects must have aged a bit now? Does the story still hold up? It was a Disney production, wasn't it? Is it a kids picture?

I think Tron is still worth watching. I didn't know it was a Disney production.

A computer games designer gets his revenge on an enemy by fighting things out in the computer world he has created.

'Interesting for its computerized blend of live action and animation.'

This is the movie database URL for Tron.

I thought this was one to avoid, but reading the reviews on it, it seems to have a cult following, and I'll have to investigate it. Also there is a link to Tron 2, the new film.

Guess I havent seen it for a while, will have to look out for "Captain Sheridan" of B5 when this film comes on again
S

What is this movie about, and why does everyone say it sucks?

I've personally never seen Tron, but everyone who has just plane laughs at how bad it was...and not "it was funny" laughter, but "it was horrible" laughter.

WOW this is an old thread. Think its been on the TV a few times since last year. Have you seen it yet Dave?

Here's the high-concept version of the plot synopsis:

I loved it, but having just read my summary it really does sound terrible

There is some information about the sequel if you fo link to this thread:

There has been speculation for at least the last ten years that a tron sequel is in the offing. I hope it happens, although, it seems to have a page on www.imdb.com - often a good first sign that it is really going to exist!

Also in that linked to thread, an interview with Steven Lisberger, the creator.director of Tron.

Well it was just on TV again, and yes I watched it for the first time! I told my son it was something he would like (he wasn't impressed!) Lost some kudos there, thanks guys!

I can see why it caused a stir back then, because (for it's time) the effects would have been amazing. Now they are a little stale, and parts of the film are a little slow too.

I wouldn't say that it was a kids film though, because some of the plot and language was too adult (though it was clean language.)

The suits and costumes were interesting, someone must have seen the musical 'Starlight Express'.

And there were a lot of pre-The Matrix ideas in there too.

The best part would be the motorcycle game, that still works, and even my son liked that part.

Glad that I've seen it, but I think that it's had it's day!

There was no bluescreen anywhere in this film. The crew worked on a black limbo stage. The footage was later "cut" into sections with rotoscoped traveling mattes. The high contrast costumes (see below) aided in the "automatic" generation of some of the mattes. The figures were then reassembled on an animation stand—very much like old fashioned cartoon cel animation—with tinted and back-lit art to create the "neon" glow.

Many of the virtual environments were hand drawn, with a tiny handful of shots combining live action with CGI (computer generated imagery). The army tank interior and the recognizer command bridge were two environments built mostly on-stage. 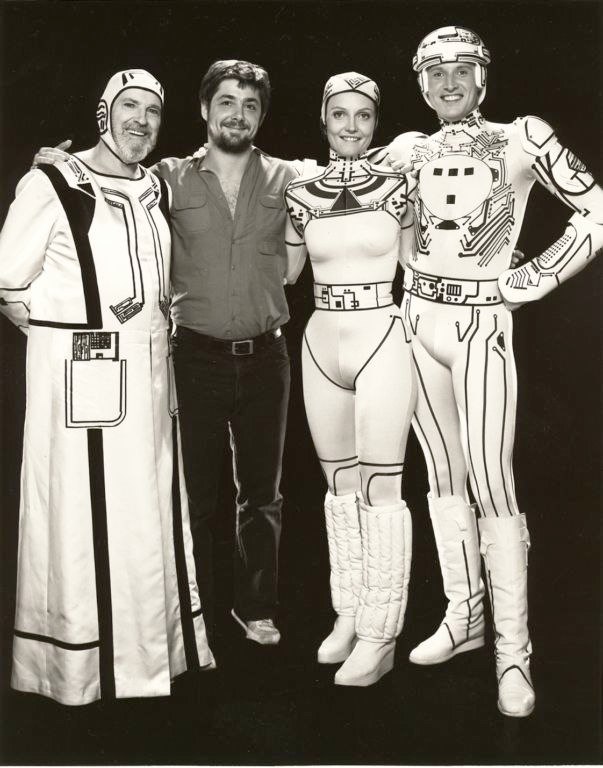 A film about virtual reality , this film was ground breaking and a fun film to watch.

This is considered a hallmark for Visual Effects. One of VFX early forays into computer-generated imaging, it was grossly expensive and tanked miserably in the box office. But it's a cult film today and studied widely throughout the industry for its creative and innovative solutions to a lot common place problems.

I'll admit, when I watched it for school, I fell asleep. IT IS SO DULL.

Funnily, I was just talking to a bunch of people about Tron and NOT ONE OF THEM HAD HEARD OF IT. HOW?!?!! They ALL lived through the 80s too.

A brilliant film. Saw it on original cinema release, played the video games, and have watched it occasionally over the years. Very stylish and ideosyncratic. The sequel was a big disappointment.
B

hitmouse said:
A brilliant film. Saw it on original cinema release, played the video games, and have watched it occasionally over the years. Very stylish and ideosyncratic. The sequel was a big disappointment.
Click to expand...

I loved the sequel and I hope Disney descried to do more.